Not Moving Up from Minimum Wage Jobs 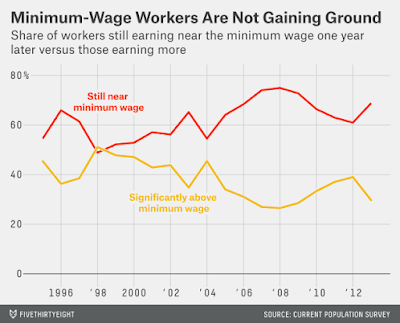 Ben Casselman looks into whether the minimum wage job is really a rung on the way up the economic ladder:


During the strong labor market of the mid-1990s, only 1 in 5 minimum-wage workers was still earning minimum wage a year later. Today, that number is nearly 1 in 3, according to my analysis of government survey data. There has been a similar rise in the number of people staying in minimum-wage jobs for three years or longer.

Even those who do get a raise often don’t get much of one: Two-thirds of minimum-wage workers in 2013 were still earning within 10 percent of the minimum wage a year later, up from about half in the 1990s. And two-fifths of Americans earning the minimum wage in 2008 were still in near-minimum-wage jobs five years later, despite the economy steadily improving during much of that time.

Just another way that the so-called "bargain" we offer workers -- keep your nose to the grindstone and you will move up -- is no longer working. For ordinary people, the 21st-century American economy has so far sucked.
Posted by John at 12:16 PM

Here in the Farmville VA area I can find workers for minimum wage, but they are almost always the least desirable folks, less work ethic, unreliable, etc. I pay $10-13/ hr and still have to cull workers. I value the ones who will actually work, using their brains and initiative and I pay accordingly.

The reason why minimum wage workers are the least desireable is because you simply cannot survive on minimum wage. Cost of living has climbed quite a bit in recent decades, and minimum wage hasn't remotely kept pace.

The minimum wage in Cumberland County is $7.25 per hour, but the living wage is $11.95 per hour. So you need to have two jobs and work an average of 65 hours a week at minimum wage to pay your bills.

This is with Cumberland County having a slightly better than average cost of living, compared to the nation as a whole. Also, that's for a single adult. It gets a lot nastier if you have kids, particularly if you're a single parent.

A huge part of why minimum wage workers stay at or near minimum wage is because they spend all their time and energy just trying to keep their heads above water. Overwhelmingly they are poorly fed, poorly rested, sickly, miserable, and quite likely neurotic. Depression is common, as is misanthropy.

They also typically lack any sort of safety net, and their lives have little to no tolerance for unexpected crisis or misfortune. Something as simple as a traffic ticket coming about at the wrong time can quite literally carry the risk of rendering you jobless and homeless in one fell swoop - or at the very least sending you into debt to cover your expenses.

Minimum wages -must- be made to reflect cost of living. Everyone deserves to make a fair living wage, no matter what job they perform.

Lives of desperation and anxiety do not produce valuable employees nor citizens. And subpar workers who need improvement do not attain it when their every waking hour is dedicated either to making enough money to stay afloat, or recuperating from the effort of doing so.

You get what you pay for. If your employees make inferior and unacceptable wages, expect them to be of commensurate value to your business.