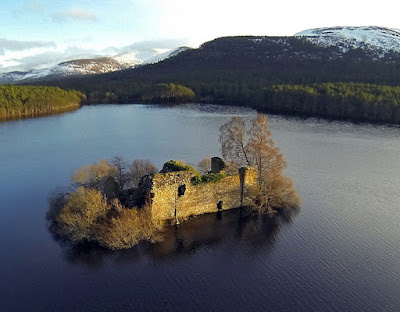 Loch an Eilein, “the Loch of the Island”, is a lovely lake in the center of Scotland, about as far as any place in Scotland can be from the coast. This district is known as Rothiemurchus, and it has been in the hands of the Grant family for more than 400 years. In recent years they have developed their property as a nature preserve within Cairngorms National Park -- has any mountain range even had a better name than the Cairngorms? 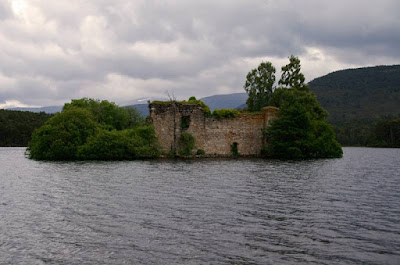 The site may have been a fortress in ancient times, but the earliest surviving stonework was erected by the Bishops of Moray when they held the land, between 1222 and 1298. In the 1380s the property fell under the control of Alexander Stewart (1343-1405), a younger son of King Robert of Scotland and Robert the Bruce’s grandson. He constructed the tower house at the north end of the island (above), with walls 1.8 m (5 feet) thick. This charming fellow comes down to us as the Wolf of Badenoch. 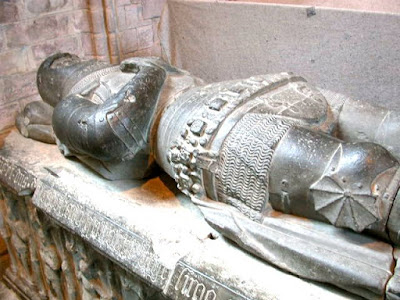 A grasping and ambitious man, Badenoch built up a huge personal estate through marriage, purchase, lease, intimidation, and outright theft. His wife was the Countess of Ross, making him Earl of Ross as well as Earl of Buchan and Lord of Badenoch, master of estates from Aberdeen to Skye. That's his tomb in Dunkeld Cathedral above. 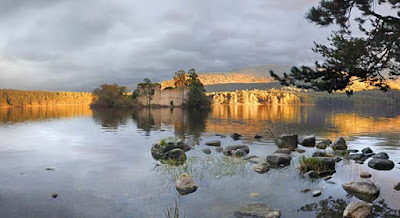 It was his conflicts with the church that ruined Badenoch's reputation. Within Badenoch -- the swath of Scotland's central mountains that includes Rothiemurchus -- previous kings of Scotland had granted the Bishops of Moray all the rights of the crown. But then Robert II granted them again to his son, and Badenoch set about enforcing his claim against the bishops by devices that included occupying their lands and seizing all the profit. Scotland was such a mess in those years that in 1384 the royal council tried to strip power from the king and make his son John, Earl of Carrick the effective ruler. Carrick had no more success than his father at reining in violent lords like his brother Badenoch, so in 1388 the council tried again and made the second son Robert, Earl of Fife the ruler. Fife was more energetic and he set about stripping Badenoch of various powers and rights. 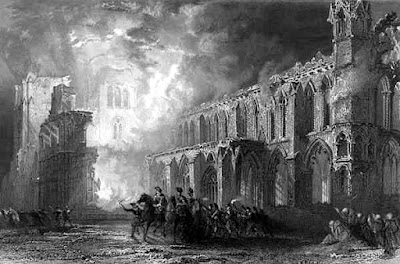 Badenoch was, as I said, married to the Countess of Ross, but they had no children and Badenoch spent most of his time with his mistress Mairead nighean Eachann. When the Countess sought a divorce, Fife supported her, and he and the Scottish bishops got the Pope to grant her an annulment. Thus Badenoch lost a great amount of land and power. Very much pissed off about this, he made open war on the Earl of Moray and the northern bishops. He sacked and burned the royal burgh of Forres on the north coast and launched a still notorious attack on the town of Elgin, where he burned all of the church's possessions: not just the cathedral but the monastery of the Greyfriars, St Giles parish church and the Hospital of Maison Dieu. (Shown above in a 19th-century illustration.) 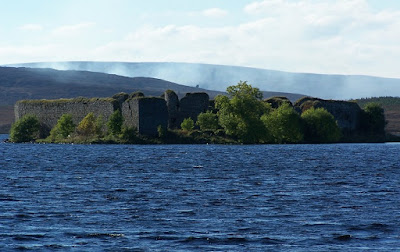 But this was the spasmodic outburst of a declining power; Badenoch was soon defeated in a battle by Fife and Moray, and three of his sons were imprisoned in Stirling Castle. He lost influence and spent his last years brooding around various castles in Badenoch, including Loch an Eilein and another at Lochindorb that is known as The Wolf's Lair (above). 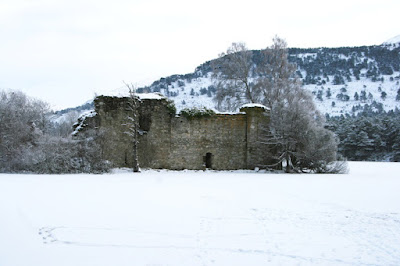 Additional walls were built at Loch an Eilein Castle around 1600 by Patrick Grant of Rothiemurchus. The most notable fighting at the castle took place in 1690, when it was unsuccessfully besieged by Jacobite forces fleeing from their defeat at the Battle of Cromdale. The island used to be bigger, but it shrank in the 1770s when a dam was built to raise the water level enough to float timber down to the River Spey. The water now obscures the zigzag causeway once said to connect the castle to the shore. 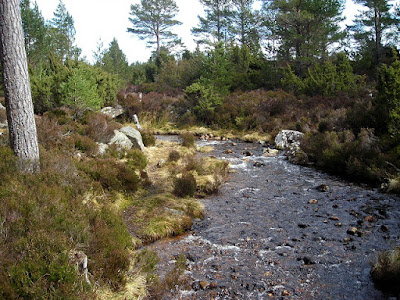 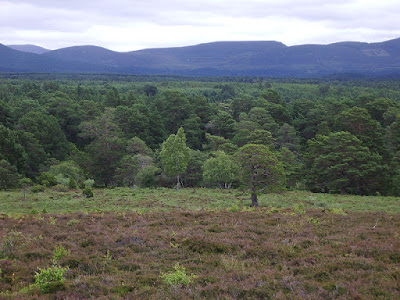 These days the main attraction of the area is the natural scenery; above are some pictures of Rothiemurchus Forest. I am wondering now if I will ever get a chance to make a hike through that forest that eventually brings me at end day to Loch an Eilein, where I can watch the sun set over the castle.
Posted by John at 8:12 AM

Indeed Cairngorms is a great name for a mountain range. But don't forget Macgillycuddy's Reeks in County Kerry. I've also long been partial to Karakoram.