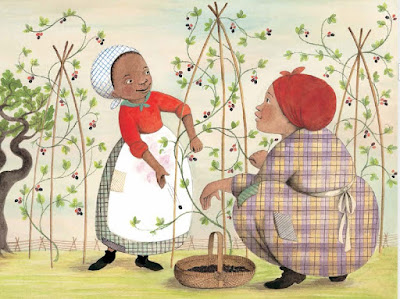 A Fine Dessert is a children's book by author Emily Jenkins and illustrator Sophie Blackall that has received several mentions as one of the best children's books of 2015. But this has embroiled the book in controversy about slavery:


The book tells the story of blackberry fool, a dish that made its way from the 18th century English countryside to the back patios of present-day San Diego. Along the way, it makes a stop through slave-era South Carolina, where a mother and daughter prepare a field-to-table dessert for their masters. . . .

The Times review paused from praising A Fine Dessert for "paying strict attention to historical accuracy" to note its "bold and somewhat unsettling choice [to] portray a smiling slave woman and her daughter in 1810 Charleston."

Some critics outside the traditional kid-lit world say that subject deserves more scrutiny. In a long discussion on Twitter, one called the illustrations "candy coated images of slavery." Commenters on the "Calling Caldecott" blog described them as "watered down," "troubled" and "horrifying." Another commenter on illustrator Sophie Blackall's blog questioned why she hadn't solicited feedback from African-American beta readers as to how they felt about the book's depiction of slavery. 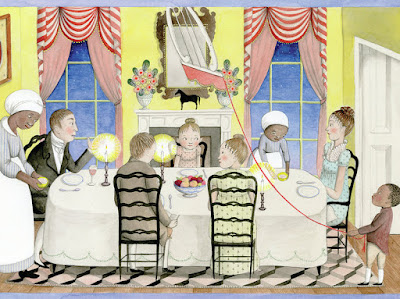 I think that if your reaction to any image of a slave not looking miserable is "horror," you have a distorted view of both slavery and human nature. More to the point, if the reaction to depictions of slavery in children's books is anger and recrimination, then authors will just leave slavery out, which would be in my mind a much greater injustice. 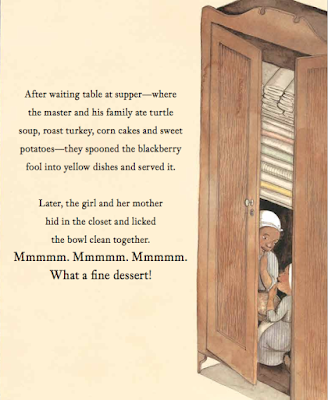 NPR interviewed Blackall, the illustrator, and here is some of what she said:


Ultimately, the way we look at pictures is incredibly complicated. I cannot ensure my images will be read the way I intended, I can only approach each illustration with as much research, thoughtfulness, empathy and imagination as I can muster.

I feel some of the reaction has grown from the circulation of this understandably disturbing phrase 'smiling slaves,' and that this section of the book is being taken out of context of the book as a whole. . . .

Reading pictures is a subjective experience. In the illustrations the enslaved mother does not smile at all; she is somber and downcast when serving the white family, and tender and solicitous when alone with her daughter. The child smiles twice. I thought long and hard about those smiles. In the first scene, the mother and girl are picking blackberries. I imagined this as a rare moment where they were engaged in a task together, out of doors, away from the house and supervision, where the mother is talking to her child. It is an intimate moment, but the mother is not smiling. The girl has a gentle smile. 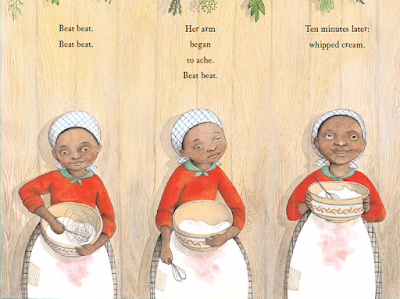 I believe oppressed people throughout history have found solace and even joy in small moments, and this was my intent. The second smile comes as the girl completes her task of whipping the cream. It's hard work, which we see in the middle frame, and the smile was intended to convey pride in completing the task. She looks up to someone, presumably her mother, as if to say, 'I did it!' To my mind, in the greater context of this section of the book, those two smiles are not gratuitous. The words 'smiling slaves' suggest multiple, happy-seeming enslaved people. That is certainly not what I intended.

Compared to Blackall's understanding approach, I think all of the critics look like narrow-minded fools.
Posted by John at 1:51 PM