An Impressive Classical Tomb in Cyprus 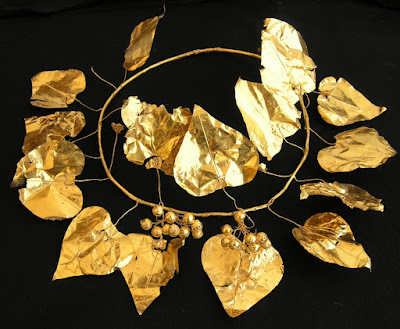 Archaeologists recently discovered an underground tomb complex near Soloi in northern Cyprus that dates to around 400 BCE. It has three burial chambers and probably holds the members of a aristocratic family. One of the chambers had been looted but the other two were intact. The finds include this lovely funeral wreath. 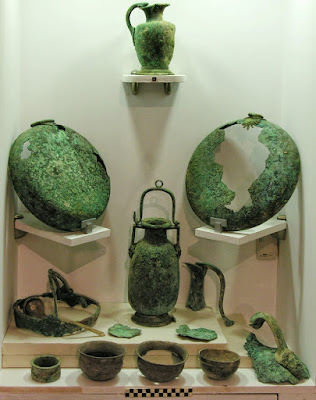 And a sixteen-piece bronze wine-serving set, which the excavators described as the equipment for a symposium. They probably came from Athens:


"This tomb complex surely proves that Soloi was in direct relationship with Athens, who was the naval power of the period," Archaeologist Hazar Kaba said. "Soloi was supplying Athens with its rich timber and copper sources, and in return, was obtaining luxurious goods such as symposium vessels," he said, noting that artists from Athens appear to have taken up residence in Soloi, influencing the design of the artifacts made there.

Close-up of the handle from one of the bronze vessels.
Posted by John at 7:29 AM