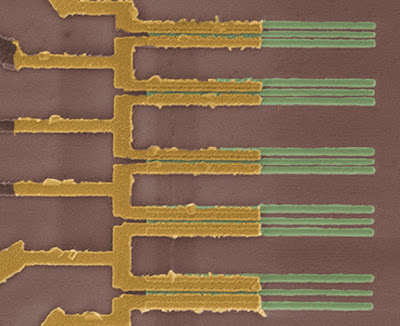 Still no limit in sight to the power of computers:


In the semiconductor business, it is called the “red brick wall” — the limit of the industry’s ability to shrink transistors beyond a certain size.

On Thursday, however, IBM scientists reported that they now believe they see a path around the wall. Writing in the journal Science, a team at the company’s Thomas J. Watson Research Center said it has found a new way to make transistors from parallel rows of carbon nanotubes. [above]

The advance is based on a new way to connect ultrathin metal wires to the nanotubes that will make it possible to continue shrinking the width of the wires without increasing electrical resistance.

And that is key because what is limiting the speed of computers now is that forcing electricity through ever tinier silicon transistors generates lots of heat. The chips we have now could run a lot faster than they do, except that they would get too hot and melt. So they have to run at what is for them a jogging speed.


The report represents a big advance for an exotic semiconductor material that has long held great promise but has also proved maddeningly difficult for scientists to work with. Single-wall carbon nanotubes are strawlike structures that are a composed of a one-atom thick matrix of carbon atoms rolled into an infinitesimally small tube.

The challenge of carbon nanotubes in their typical state is that they form what scientists call a giant “hairball” of interwoven molecules.

However, researchers have found ways to align them closely and in regularly spaced rows and deposit them on silicon wafers with great precision. They then serve the crucial role of a semiconductor, allowing electrical current to be switched on and off in a computer circuit.

On the other hand, I have to wonder what we are going to use all this computing power for. The computer I have now can already load and manipulate a super-detailed aerial photograph of an entire county; it has been years, I think, since I even encountered a problem that my computer simply lacked the calculating power to solve. Games are limited much more these days by the storytelling power of the writers than they are by the quality of the graphics.

But should we ever find a way to use all that power, we will have it in a decade or two.
Posted by John at 2:47 PM