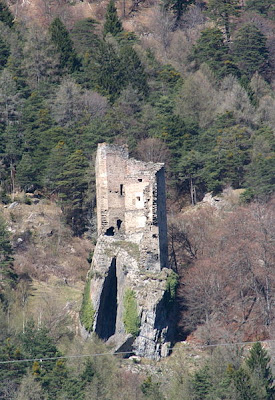 Haldenstein castle sits perched on this pinnacle of rock overlooking the town of the same name, in the Swiss canton of Graubünden. It was built some time before 1180. A "wild eagle's nest" (wilde Adlernest), or so Swiss tourist propaganda has it. 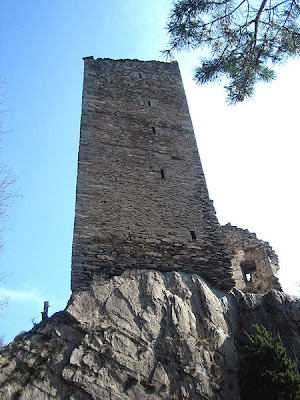 It belonged to the Lords or Barons von Haldenstein, whose small lordship survived as a nearly independent state down to 1803. Perhaps the castle's most famous lord was Ulrich von Haldenstein, who, besides having the archetypal German medieval noble name, was a general serving the Habsburgs in the mid 1300s, 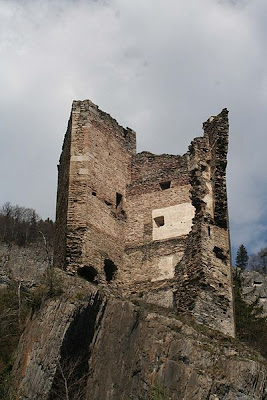 Since there was no room to build outward on the rock, the barons built up; you can see how the ruins looked striped, each stripe representing another stage of upward construction.

The castle's rock is a spur of the Calanda massif, which looms behind it. The castle was severely damaged in the twentieth century by a massive landslide that roared down from Calanda and ripped the castle in half before destroying a good part of the town. 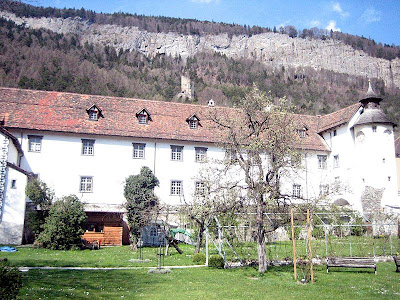 The Barons von Haldenstein had long moved on to this so-called castle, built in 1545. My German source properly names this a Pompgebäude, but when you search for Haldenstein castle it is mainly pictures of this that come up. The builder was actually a French lawyer named J.J. Caston, who had married the widow of the previous lord. So the fierce tower of old Haldenstein was left to eagles and landslides, and to our imaginations.
Posted by John at 9:57 PM