A Calendar, or a Row of Pits? 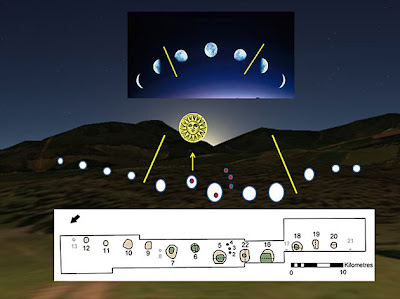 Scottish archaeologists have announced what they say is the world's oldest known calendar, a row of twelve pits they say represent the phases of the moon and align with the midwinter solstice:


Twelve pits, said to have been created by hunter gatherers almost 10,000 years ago, were unearthed in a field at Crathes Castle, Aberdeenshire. The pits are arranged in a 50-metre long row and are said to represent the months of the year and the phases of the moon.


Intriguingly, this arc is aligned perfectly with a notch in the landscape where the sun would have risen on the day of the midwinter solstice 10,000 years ago. This was important, says Gaffney, because not only does this give further compelling evidence for the purpose of the moon-shaped pits, but also because without some form of calibration with the solar year a calendar based on 12 lunar months would soon be out of sync with the sun and become meaningless. "Positioning their calendar in the landscape the way they did would have allowed the people who built it to 'recalibrate' the lunar months every winter to bring their calendar in line with the solar year."

Count me as a skeptic on this one. That looks like a perfectly ordinary row of pits to me, and since they aren't in a straight line you could say they align with just about anything. Some of the pits look like post holes, and some look like the sort of random disturbances you find wherever people lived. Did they have posts in them or not?

But it gets worse:


Scientists believe the Mesolithic monument discovered in Aberdeenshire was in use for some 4,000 years, from 8,000 BC to approximately 4,000 BC.

How could a row of open pits remain open for 4,000 years? Or a row of wooden posts stand that long? This is crazy talk. There is said to be "geophysical evidence" that the pits were redug many times, but if they had been they would have completely lost their original shape and gotten a lot bigger. (Don't believe me? Try it. Dig a 2-foot (60-cm) wide and deep pit in your yard and try to keep its shape perfectly consistent for even one year. You can't add any new material, because archaeologists could tell that, and you can't have it under a roof, because there were no other structures at this site.)


Variation in the depths of the pits suggests that each pit or month may have also been divided into three roughly ten-day 'weeks' used to indicate the waxing moon, the gibbous/full moon and the waning moon.

Except that any hole in the dirt that you leave open very soon fills in, so you wouldn't have any idea how deep it had been originally, and if the pits had posts in them, how could anyone ever have seen how deep they were? And if you redug them every so often, how could you keep the depths consistent?