A Canadian Tragedy and Moving Oil by Train 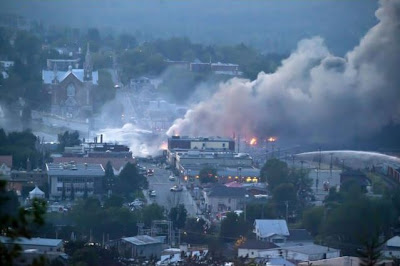 
The train had been parked for an overnight shift change four miles (7 kilometers) from the Canadian lakeside town when at about 1 a.m. Saturday, the 73 black tankers carrying pressurized containers of crude oil decoupled from their five locomotives for unknown reasons. They rolled downhill driverless into the town center, derailed, and set off a series of explosions and fire that raged for hours in the small community near the Maine border.

"It looks like a war zone," Prime Minister Stephen Harper said after touring the scene Sunday, while authorities confirmed five deaths with dozens more missing. Some 30 buildings were destroyed, including a crowded bistro, and the town's library and archives. A Red Cross volunteer told The Star newspaper there were no wounded to care for: "They're all dead."

Of course they will be investigations and so on, but the root cause of this explosion is the huge increase in moving crude oil by train. In the US we are now moving 800,000 barrels a day this way, a tenfold increase in three years. Why? Because no pipelines have yet been built to the hot new oil fields in North Dakota. And the reason no pipelines have been built is that regulatory hurdles and opposition from property owners have made this very difficult to do. So if you think that opposing the Keystone Pipeline will prevent the export of Canadian tar sands oil, think again; it will move by train instead. This wastes a huge amount of energy compared to pipelines, and since the train tracks run right through the center of so many small towns, more disasters are inevitable.
Posted by John at 7:20 PM

more reasons to get off oil. too bad its derivatives are in many ways such excellent products. it's a marvel that millions of motorists use gasoline every day, with extremely low risk of conflagration, yet it packs so much energy into each unit. it's hard to find a comparable medium.