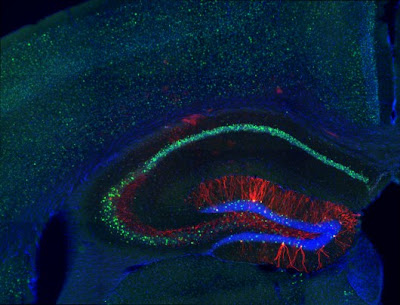 If you put a mouse in a blue room and torture it with electric shocks, it will thereafter fear blue rooms, because it has learned to associated blue rooms with pain. What Ramirez and his colleagues did was to isolate the pattern of brain cell activity that seemed to be associated with the memory of pain in the blue room and use optical stimulation to cause the same pattern of cells to fire in a non-tortured mouse. That mouse then feared blue rooms.

But what did the mouse think? Did it actually remember electroshocks in a blue room, or was it just a generalized fear that was implanted? If so, is that a memory? Or was it more a sort of deja vu experience; like, I don't know why, but this room creeps me out?

And how would you know? The abstract of the Science article reads like this:


Memories can be unreliable. We created a false memory in mice by optogenetically manipulating memory engram–bearing cells in the hippocampus. Dentate gyrus (DG) or CA1 neurons activated by exposure to a particular context were labeled with channelrhodopsin-2. These neurons were later optically reactivated during fear conditioning in a different context. The DG experimental group showed increased freezing in the original context, in which a foot shock was never delivered. The recall of this false memory was context-specific, activated similar downstream regions engaged during natural fear memory recall, and was also capable of driving an active fear response. Our data demonstrate that it is possible to generate an internally represented and behaviorally expressed fear memory via artificial means.

It is certainly possible to implant false memories in people, and it doesn't require fancy laboratory gear. Psychologists have shown that witnesses can be induced to pick the wrong man out of a police lineup by very simple cues, and over time they will become ever more convinced that their false identification is correct, especially if the "police" in the experiment say something like, "Good job, that's the guy we suspected." Ramirez himself has been telling a great story along those lines:


False memories in humans often happen when a person swaps out one detail for another. Sometimes these mistakes are trivial, such as swearing that you left your keys on the kitchen table only to find them hanging in the garage. In a courtroom setting, a false eyewitness account can destroy an innocent person’s life.

Ramirez recounts a true story about an Australian psychologist who was arrested for a rape he did not commit. Physically, he fit the bill of the victim’s description, but he had a foolproof alibi. He was speaking on a live television show at the time of the rape — the same show, it turned out, the victim had been watching right before her attack. As a result, she described him as her attacker, even though it wasn’t possible.

To me the most startling thing about the new experiment is the identification of particular patterns of firing neurons with particular mental events. The activated cells are the ones that show up read in the photograph above, showing the hippocampus of a mouse brain. Nobody has yet been able to isolate such cell patterns in humans, but I suppose that is only a matter of time; and then somebody can volunteer to undergo this experience and tell us what it is like.

Video of Ramirez and Xu Liu talking about their research here.
Posted by John at 7:29 AM