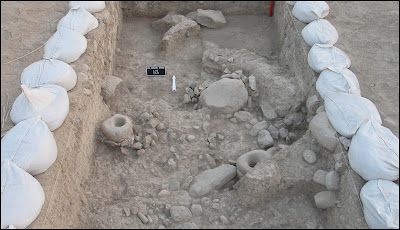 The new picture of a very gradual transition from gathering to farming in the Near East received additional support this month with some new data from western Iran. Joint German-Iranian excavations at Chogha Golan in the foothills of the Zagros Mountains revealed that the entire, 26-foot-tall  (8 m) tel dates to the pre-pottery Neolithic. Radiocarbon dates extend from 9,700 to 7,500 BCE.


The botanical record from Chogha Golan documents how the inhabitants of the site cultivated wild barley (Hordeum spontaneum) and other wild progenitor species of modern crops, such as wild lentil and pea. Wild wheat species (Triticum spp.) are initially present at less than 10% of total plant species but increase to more than 20% during the last 300 years of the sequence. Around 9800 calendar years before the present, domesticated-type emmer appears. The archaeobotanical remains from Chogha Golan represent the earliest record of long-term plant management in Iran.

So the people of these villages did not receive agriculture from Syria and Palestine, along with already domesticated species. No, they went through the same very gradual transition from increasing use of wild plants to managing wild plants to domestication and agriculture. This took two thousand years, which was just as long back then as it is now, and you probably think the Romans ruled a long time ago. Note the numerous grinding stones in the trench above; another from the site is below. 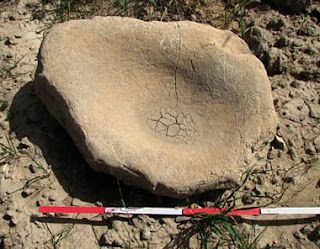 A preliminary, 2011 paper on these finds by Simone Riehl et al., which I found on Academia.edu, adds interesting details to the recent announcement. The floral remains from Chogha Golan include numerous species of large- and small-seeded plants, such as bitter vetches, mustard, goosefoot, amaranth, fenugreek, bulrushes, and things I had never heard of (smallflower milkvetch,sainfoin, Lallemantia iberica), 78 species in all. These people were making very intensive use of the whole range of available plants. 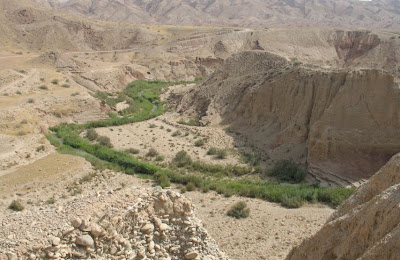 I happened to notice while reading about this site that in German "fertile crescent" comes out as Der Fruchtbare Halbmond, the fruitful half-moon. Above, the modern landscape around Chogha Golan.
Posted by John at 6:57 PM