More Evidence that Homo floresiensis was a Distinct Species 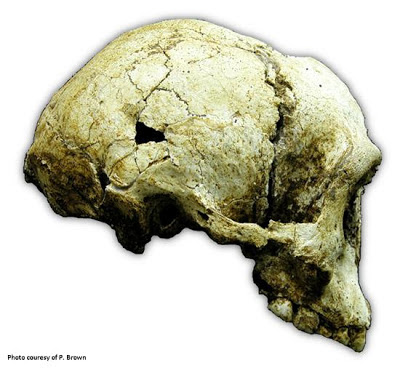 Ever since the discovery of the "hobbit" bones from the island of Flores was announced, anthropologists have argued about what they are. The view of the discoverers was that they represent a new species of very small hominids. Others have argued that they are simply small modern humans with some pathological condition, such as microcephaly. Now Karen Baab and colleagues have carried out sophisticated 3-dimensional modeling of the Liang Bua skull (above) and compared their results to healthy modern humans, microcephalic modern humans, and various specimens of archaic hominid species such as Homo erectus. 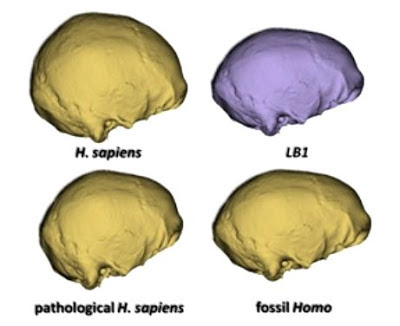 Important shape differences captured by statistical analysis of the cranium after removing size differences. Healthy modern humans (Top left); modern humans with microcephaly (Bottom left); LB1 (Homo floresiensis) (Top right, shown in purple); and fossil humans belonging to the genus Homo (Bottom right). These images highlight how much taller and rounder the modern human braincase is compared to the other three groups when viewed from the side. More importantly, these images also illustrate how much more similar the LB1 skull is to fossil humans compared to modern humans suffering from microcephaly - a condition that results in a small brain size and therefore skull size - particularly in its low and elongated silhouette.

So yet more evidence that Homo floresiensis was a real, distinct species, or at least not a modern human.
Posted by John at 7:21 AM