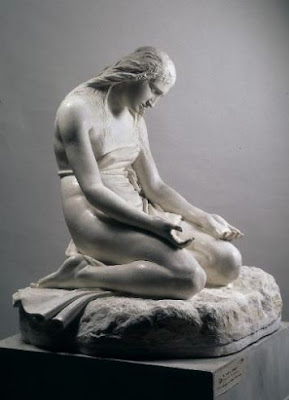 Antonio Canova (1757-1822) was the great master of neoclassical sculpture. Born into a family of stone carvers in the Venetian Alps, he was orphaned at the age of three. His grandfather was one of those highly skilled people who straddle the boundary between artist and artisan, and he taught Antonio to draw and carve. Antonio's first surviving works were executed at the age of nine. Above, Penitent Magdalene, 1796. 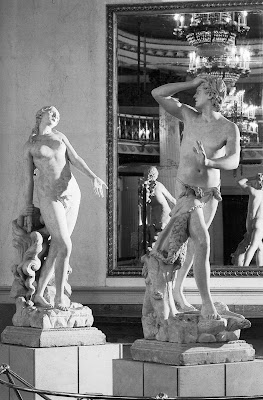 As a teenager Canova was singled out for patronage by a local senator, who commissioned from him this Orpheus and Eurydice; this was completed when Canova was 16.

It is generally said that Canova's youthful works were in a Baroque style, but that after he moved to Rome in 1780 he threw himself into the study of classical works and discarded the "theatrical excesses" of the Baroque. (Quote from wikipedia, a good guide to conventional wisdom in these matters.) The difference between Baroque and Neoclassical sculpture is one of those refined aesthetic distinctions that connoisseurs see a lot more easily than I can. Baroque artists were more interested in capturing movement and emotion, and their marble works tend to be rougher, with more folds of flesh and rippling muscles; Neoclassial work tends to be smoother, and more often shows people at rest. But something like the Penitent Magdalene shown at the top of this post has as much emotion and theatricality as anything by Bernini, so why it is considered Neoclassical escapes me. A whole church in the Neoclassical style is something very different from a Baroque church, with a lot less gaudy decoration, but many of the individual pieces seem interchangeable to me. 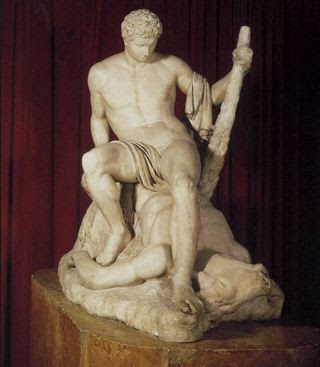 This is Theseus and the Minotaur, 1781,which is often said to mark Canova's move to a more purely classical style. Note the decision to depict the restful moment after the battle rather than the battle itself, and Theseus's rather smooth figure, without the bulging muscles Michelangelo or Bernini would have given him. 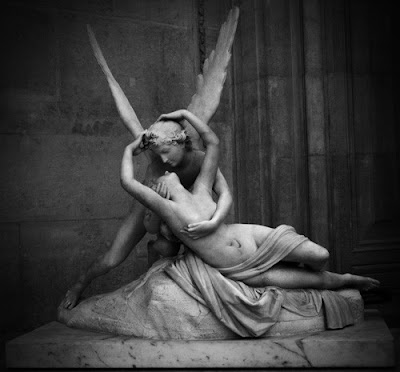 Psyche Revived by the Kiss of Eros, 1787. One thing Neoclassicism meant was a habit of depicting the same famous classical scenes over and over and over again. 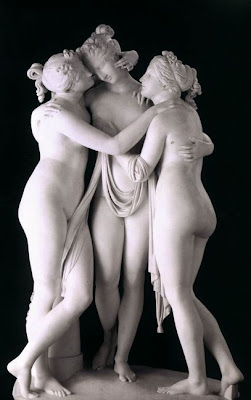 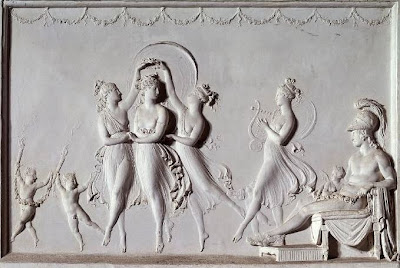 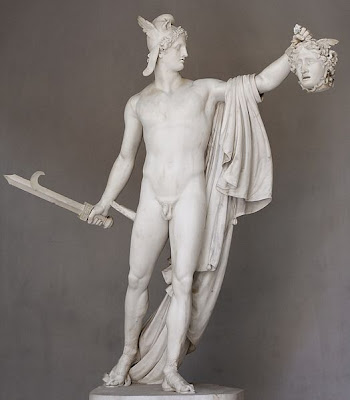 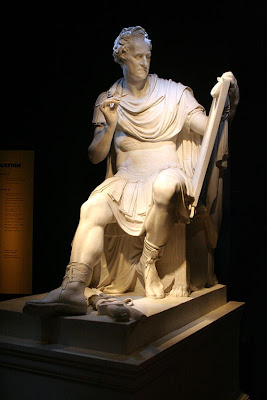 It also meant depicting contemporary figures in classical dress, as if they were at a costume party. This is Canova's George Washington, looking like a Roman general writing dispatches to the Senate, with a hairstyle never seen in Colonial Virginia. This was unveiled in 1815.

But I suppose every style has its foibles, and who can hold anything against a man who could do this? Pauline Bonaparte Borghese as Venus, 1805-1808. 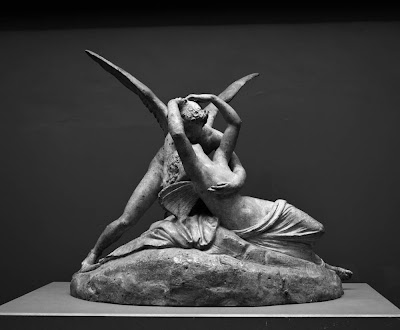 Plaster cast of Psyche Revived by the Kiss of Eros, 1794. This is in the Met; because Canova's finished marble sculptures are so smooth, or even slick, many of us moderns prefer the rougher preliminary casts.
Posted by John at 1:07 PM