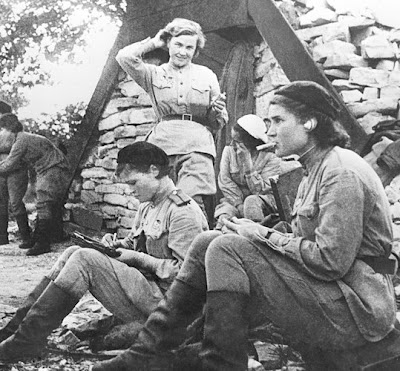 From the Times obituary of Nadia Popova (above, standing) I just learned about another of World War II's strange sidelights, the female Soviet pilots known to the Germans as Nachthexen:


The Nazis called them “Night Witches” because the whooshing noise their plywood and canvas airplanes made reminded the Germans of the sound of a witch’s broomstick.

The Russian women who piloted those planes, onetime crop dusters, took it as a compliment. In 30,000 missions over four years, they dumped 23,000 tons of bombs on the German invaders, ultimately helping to chase them back to Berlin. Any German pilot who downed a “witch” was awarded an Iron Cross.

These young heroines, all volunteers and most in their teens and early 20s, became legends of World War II but are now largely forgotten. Flying only in the dark, they had no parachutes, guns, radios or radar, only maps and compasses. If hit by tracer bullets, their planes would burn like sheets of paper.

It's a fascinating story. After World War I, flying clubs were set up in all of Europe's major countries, supported by governments with the idea of training pilots for future wars and more generally improving their nations' aeronautical infrastructure. The Soviets were the heirs to the European revolutionary tradition, which included equal rights for women among its goals, and feminism was the official policy of the Soviet state. Most Soviet leaders disliked the idea and in practice women had no greater freedom than in the west. But sometimes women were allowed to step forward, and one of the places this happened was in the Soviet flying clubs, which were about one quarter female. So when the Germans overran most of European Russia and the Soviet state was in desperate need of any help it could get, it began allowing these women to fly in combat:


On Oct. 8, 1941, Joseph Stalin issued an order to deploy three regiments of female pilots, one of which became the Night Witches. The Russian pilot corps clearly needed bolstering; in addition, some have pointed out, heroic women made good propaganda. The lobbying of Marina Raskova, who had set several flying records and became the first commander of the women’s units, helped greatly.

They continued to serve through the end of the war. 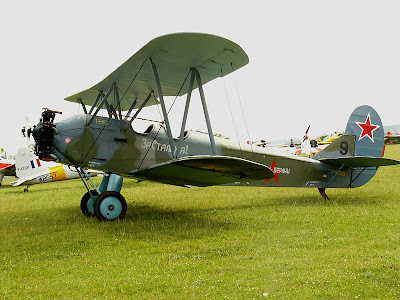 Wikipedia supplies the information that these women mainly piloted Polikarpov Po-2 biplanes like this one, and that the Germans found them hard to shoot down because they flew at a speed lower than the stall speed of a German fighter; shooting down another plane is easiest if you can match its speed, but any German pilot who tried to match the speed of one of these would crash. They could also glide for a considerable distance, and sometimes approached their targets with their engines off; it was the sound of a Po-2 with its engines off that made German soldiers think of witches' brooms.


I sometimes stare into the blackness and close my eyes. I can still imagine myself as a young girl, up there in my little bomber. And I ask myself, ‘Nadia, how did you do it?’

I think many people probably feel that way about what they did in World War II.
Posted by John at 9:05 AM