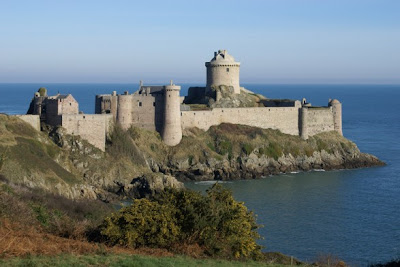 Fort la Latte, otherwise le Château de la Roche Goyon, is a famous fortress in a spectacular location on the coast of Brittany. The peninsula where it sits is divided from the mainland by two deep crevasses, and by the 13th century the castle included gates and drawbridges at each ravine. 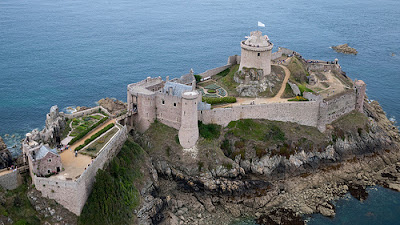 The first fortress was built on this spot in 937 by the semi-legendary Goyon, Lord of Matignon, who helped defend against the Vikings and founded of one of medieval Brittany's leading families. The family held the fortress throughout the Middle Ages. The oldest surviving parts of the fortress, including the keep, were built in the 13th century. 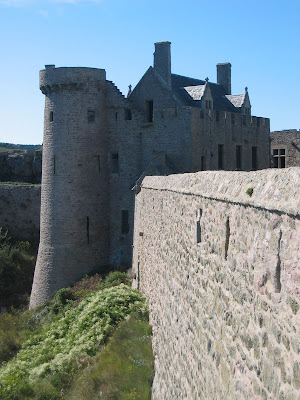 The castle was rebuilt and enlarged in the mid 1300s. This was during Brittany's War of Succession, between the House of Montfort and the House of Blois over the Dukedom (1341-1364). The Goyon family was deeply involved in the war. The struggle was caught up in the Hundred Years War between England and France, England supporting the Montforts and France supporting Blois. 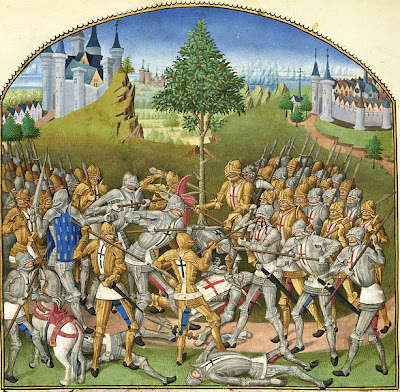 Jean Goyon, second son of the Lord of Matignon, fought in the famous Combat of the Thirty. This was a battle between thirty knightly champions from each side of the war of succession, waged in 1351. This event very quickly became famous and was celebrated in numerous ballads and at least one poem of nearly epic length. The chroniclers, too, gave it much attention, Froissart writing that the warriors "held themselves as valiantly on both sides as if they had been all Rolands and Olivers." I find it fascinating that despite all this early documentation there is no agreement on what the conflict was about. In one version it was a sort of tournament staged in honor of the leading ladies of the two factions; in another it was an attempt to settle the succession question in a chivalric fashion; in a third it originated when one of the principles attacked the peasants of the other, causing great damage, leading to a challenge to personal combat. This may be a general characteristic of oral tales, which are much better at passing on the what than the why. 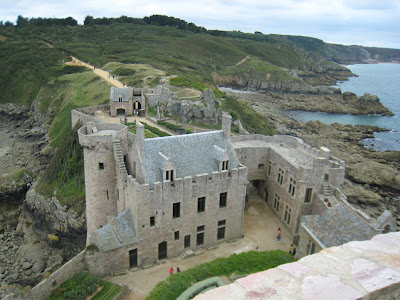 To return to the Fort-la-Latte, it did see combat during this conflict. Bertrand du Guesclin, the Constable of France, sent a small detachment to seize the castle by sudden assault in 1379, but they were repelled and could mount only a half-hearted siege. It was besieged again by the English in 1490, but they also failed to take it. 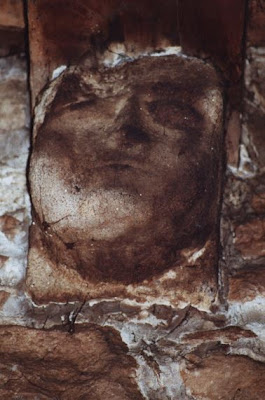 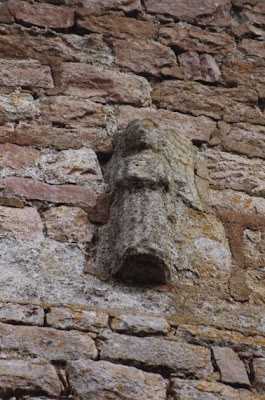 One of the castle's surviving medieval bits is these carvings, which depicted the symbols of the four evangelists and other religious emblems. 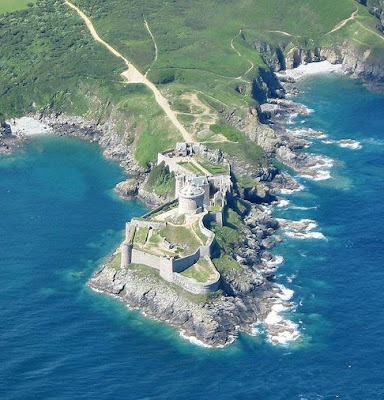 The castle was finally stormed in 1597, during the Wars of Religion. The soldiers of the Holy League did great damage to the buildings, blew holes in the walls, and destroyed the chapel, which had been converted to Protestant worship. Only the keep escaped major injury. 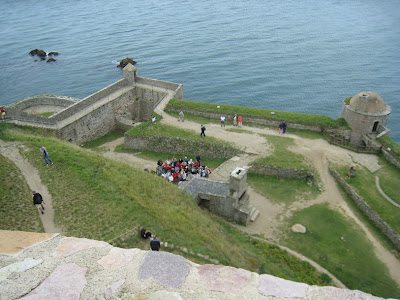 Since the castle was in such bad shape, its noble owners sold it to the crown. Under Louis XIV it was rebuilt and armed with canon as part of the defenses of the great naval base at Saint-Malo. This rebuilding of 1690 to 1715 gave it the shape it has today. It served as part of France's coastal defenses throughout the eighteenth century, and in 1693 it was bombarded by an English/Dutch fleet. According to one online source,


In 1715, James III Stuart took from refuge there and thought the place was sinister. One must say he landed there on an awful evening in November. 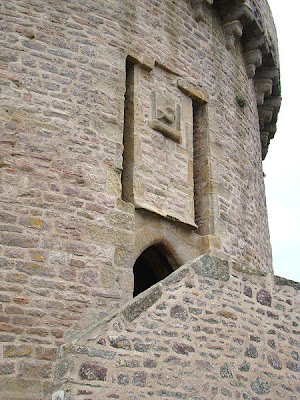 The fortress was attacked one last time in 1815, by a group of young men who tried to seize it in the name of Napoleon. 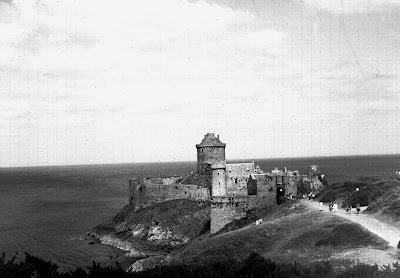 The castle has appeared in several movies, including The Vikings (1958), with Kirk Douglas and Tony Curtis.
Posted by John at 8:17 AM

Your reference in passing to James III Stuart led me on a fascinating whirl through Wikipedia, where I discovered the Jacobite succession, about which I had never really thought.

How *odd* hereditary royalty seems to me :)

(Though w/ Bush Sr. and Jr. and possibly Jeb as well... who knows what the future holds! President Chelsea Clinton? )