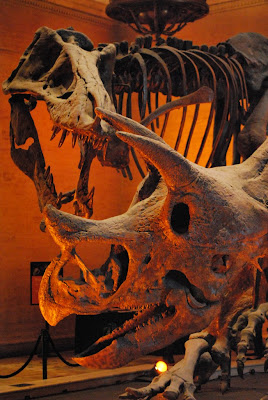 It has been a bad couple of weeks for dinosaur cynics. First, another blow to the notion that Tyrannosaurus rex was a scavenger, not a hunter: a hadrosaur skeleton was found with a tyrannosaur tooth stuck in its tail, the bone healed around it. Obviously the tyrannosaur had attacked a live hadrosaur, which escaped, taking a broken off tooth with it, and its body eventually healed around the embedded tooth. Most paleontologists never took this theory seriously, anyway, so they are announcing that it is now dead and buried. 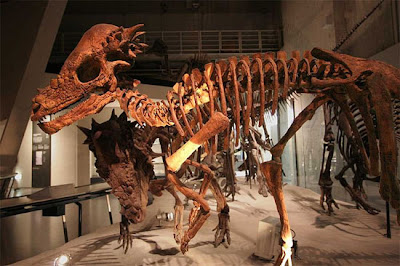 And now, very convincing evidence that Pachychephalosaurus really did ram things with their bony heads. This was challenged by people who said the head bones were too thin, or the rest of the animal's anatomy was too fragile, or some such, so the domes must really have been used for sexual signalling. 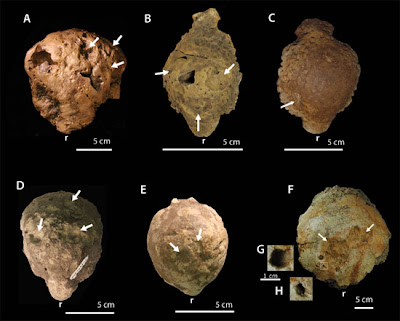 But now paleontologist Joseph Peterson has published a detailed study of all the Pachycephalosaurus skulls he could get his hands on, and he found that 20 percent have just the sort of wounds -- pits, cracks -- you see on the skulls of male bighorn sheep. These wounds are only found on the thick domes, which people have suspected belonged to males. This is about the best possible evidence for habitual head ramming.

What is it with these people who have to go around saying that things aren't as cool or interesting as you thought? The world is full of spoilsports who can't stand for things to be exciting. Sure, there is lots of dumb hype in the world, and plenty of reason to be skeptical. But you more we learn about the world, the more full it is of wonders beyond our imagining.
Posted by John at 6:48 AM