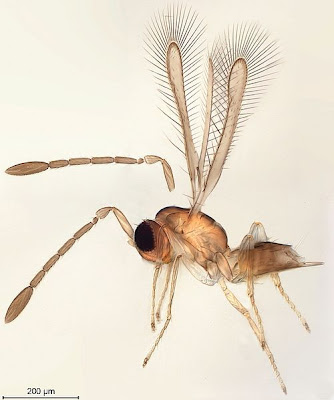 How does one species split into two? This is a hard question, since even very limited gene flow between two populations will keep them from ever truly separating. The most common model is "geographic isolation," that is, two populations become separated by a mountain range or one group settles on an island (like Darwin's finches).

But now there may be a new model of how species divide: gut bacteria. Seth Bordenstein and Robert Brucker of Vanderbilt investigated two species of fairy wasps that cannot interbreed to produce viable young. They showed that this is not because of genetic differences in the wasps, but different populations of gut bacteria; raise the wasps in a sterile environment and they can interbreed successfully.

The more we learn about the bacteria inside us, the more important they seem.
Posted by John at 8:37 AM