Baloney about War and Evolution 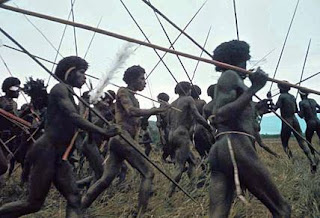 The prevalence of war in primitive societies is one of those topics which brings out the worst in anthropology. Leftists are determined to argue that somehow, despite all the evidence, war is not part of our evolutionary heritage:


Douglas Fry of the University of Arizona in Tucson, Arizona, and Patrik Söderberg of Åbo Akademi University in Vasa, Finland, analyzed 148 incidents of lethal aggression within a cross-cultural sample of 21 random mobile forager band societies. They found that individuals acting on their own were responsible for the majority of the deaths, with about 85 percent of them involving killers and victims that belonged to the same group. The evidence suggested that about two-thirds of the events could be attributed to family feuds, competition over a mate, accidents or "group-sanctioned executions" (such as punishment for an act that the group would consider a crime). They found little evidence suggesting war-like behavior, such as clear traces of specialized weapons, skeletal trauma among many individuals in a location, group burials showing many cases of violent death, fortified sites, and placement of settlements in defensive locations. Most of the finds showed evidence of lethal trauma on single prehistoric skeletons. . . .
According to the study authors, these findings challenge the notion that early humans were constantly raiding and attacking other groups, and the theory that waging war is "in our blood", as has been suggested by many scholars in the past.

How does this study challenge that notion? If 85 percent of killings were by individuals acting alone, that presumably leaves 15 percent that result from group action. Is that fifteen percent of deaths somehow unhuman, not part of our evolutionary heritage?

Consider the US in the twenty-first century. Over the past 13 years, about 10,000 Americans have died in wars or terrorist attacks. About 125,000 have been murdered. So only 8 percent of American violent deaths in this century have been in war. Does that mean we are not a warlike people, or that war is not a major part of our culture?

When you consider that some primitive people have overall rates of violent death five times higher than ours, 15 percent of that could be a pretty big deal. War can also have evolutionary effects that go far beyond simple killing, by determining who has access to resources. We know of many primitive societies where war was constant reality. So even if these statistics are right -- which I doubt, considering the source -- war might still be a major part of many societies and very much "in our blood."
Posted by John at 8:48 PM