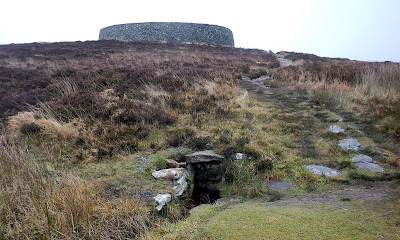 Grianan of Aileach, a stunning hillfort in the far north of the Republic of Ireland, was attacked by "drunken thugs" this week. Drunken Irish, thugs, from Derry.


The Irish Examiner reports that the drunken thugs pulled stones from An Grianan Fort in Co. Donegal and defecated in a holy well before they verbally abused tourists. . . .

Garda Eddie Doherty told the court that when he arrived at the scene he found women’s underwear, human excrement, beer bottles, and historic stones thrown around the fort. Doherty also revealed how U.S. and Chinese tourists were left stunned by the violence. “It was just a scene of carnage. The tourists who were visiting the area were traumatised by what they saw,” said Garda Doherty. He added: “When I arrived both men were taking rocks from the walls and were throwing them down towards a car park.

Judge Paul Kelly described the behavior as ignorant, loutish and thuggish. “This monument is one of the best preserved of its kind and I visited it myself some months ago,” he said. “It has stood the test of time by many invading armies over the years and then this group of thugs come along and invade it and start to dismantle it from the inside.”

That's "St. Patrick's Well" in the picture above, with the fort looming above. Before you get too righteous, the well never had anything to do with St. Patrick and the walls of the fort were reconstructed in the 19th century.
Posted by John at 7:26 AM