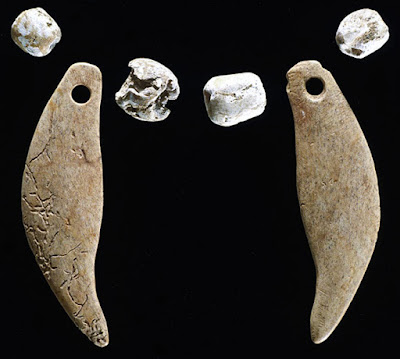 About 2,000 years ago, some Indians in Illinois had a pet kitten:


The Elizabeth site is a bluff-top mortuary mound group constructed and primarily used during Hopewellian (Middle Woodland) times. Recent reanalysis of nonhuman skeletal remains from the site reveals that an intentional burial previously identified as a dog (Canis familiaris) is actually an immature bobcat (Lynx rufus). . . . The bobcat was a separate, human-like interment wearing a necklace of shell beads and effigy bear canine teeth. To our knowledge, this is the only decorated wild cat burial in the archaeological record. It provides compelling evidence for a complex relationship between felids and humans in the prehistoric Americas, including possible taming.

The bobcat was 4 to 7 months old. This site was excavated back in the 1980s, and this discovery was made by Ph.D. student Angela Perri while she was researching dog burials.


The skeleton was complete, and there were no cut marks or other signs of trauma, suggesting to Perri that the animal had not been sacrificed. When she looked back at the original excavation photos, she saw that the bobcat had been carefully placed in its grave. “It looked respectful; its paws were placed together,” she says. “It was clearly not just thrown into a hole.” . . . The pomp and circumstance of the burial, she says, “suggests this animal had a very special place in the life of these people.” And the age of the kitten implies that the villagers brought it in from the wild—perhaps as an orphan—and may have tried to raise it.