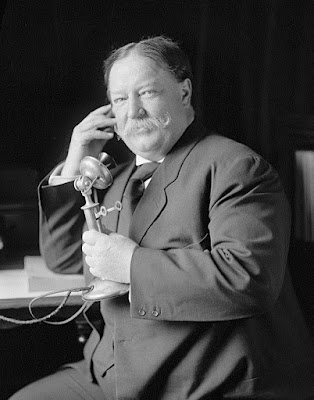 Just finished listening to The Bully Pulpit: Theodore Roosevelt, William Howard Taft, and the Golden Age of Journalism (2013), 29 cds long but worth every minute. Doris Kearns Goodwin has a real talent for combining political narrative with personal biography, and she put it to great use in this book. If you have any interest in this period or these people, read it.

Two things about it linger in my mind. The first is William Howard Taft's amazing career, about which I knew very little before I read this. Taft is the only man ever to have been both President and Chief Justice of the Supreme Court, and he was also Solicitor General, Secretary of War and the first American Governor General of the Philippines. He accomplished all this while remaining one of nicest people in the country, beloved by almost everyone who knew him. He got along with everyone, including most leading Filipinos, who raised a storm of protest when Roosevelt tried to recall him. No one ever suspected him of double-dealing, egotism, putting his own interests above those of the country. Even his enemies thought he was a terrific chap. Can a really nice guy get ahead in America? Taft's story answers "yes."

But if you look Taft up at any of the first three pages of Google links -- wikipedia, whitehouse.gov, etc. -- you will read not a word about his personality. Lists of bills passed, jobs held, names of relatives, and so on, the trivia of a public life. Nothing at all about Taft himself, nor anything serious about his political philosophy, which in Taft's case was built around fairness. This is history? Blech. And this explains why someone like Doris Kearns Goodwin who can make the connections between political acts, political beliefs and private lives can sell millions of books and make piles of money.

The second thing that lingers with me is that Teddy Roosevelt was really sort of a proto-fascist. Roosevelt worshiped action, especially violent action, and had a sneering contempt for rules. He loved war, and bloody battles; he loved politics more the uglier and more combative it became. He once said that the proudest accomplishment of his presidency was stealing Panama from Colombia without asking approval from anyone. His enemies thought he was a dangerous loose canon, and even his close friend and follower Taft said that Roosevelt should have paid more attention to the Constitution. Roosevelt loved appealing directly to the people, cutting out the Congress and all the other middle men. Later in his career, tired of seeing the courts strike down Progressive laws, Roosevelt advocated allowing a popular plebiscite to overrule the Supreme Court. Roosevelt's followers were also much like the followers of fascist dictators; Taft's policies were very close to Roosevelt's, but Roosevelt's fans found Taft a plodding bore and longed for their dynamic Leader to come out of retirement and infuse the nation with energy again. In a different setting, it is easy to imagine Roosevelt tossing out both the Congress and the courts and ruling as an elected dictator like Hugo Chavez or Lee Kuan Yew, or just seizing power outright like Mussolini.

Which emphasizes, again, the importance of circumstances. Roosevelt and Mussolini may have been much alike as men, but Mussolini lived in an Italy where democracy had little legitimacy, and that ended up making a huge difference. Mussolini is remembered as a disgrace, Roosevelt as a hero. Taft, I suppose, is hardly remembered at all, but he really deserves to be.
Posted by John at 7:05 AM