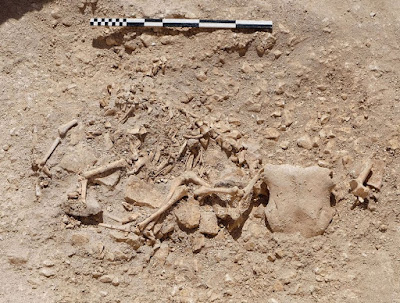 Excavations of a Celtic site near Winterborne Kingston in Dorset, England, have turned up several bizarre hybrid animal skeletons, including:


And, weird in a somewhat different way:


One particularly bizarre arrangement of animal bones also involved a human skeleton. A young woman appears to have been sacrificed (there was an indication that her throat had probably been slit) – and was then buried on a ‘bed’ of specially arranged cattle, sheep, dog and horse bones. Significantly these animal bones had been deliberately sorted to mirror the bones of the dead woman. The animals’ skull fragments formed the surface her head rested on, while the animals’ leg bones formed the surface her legs rested on. 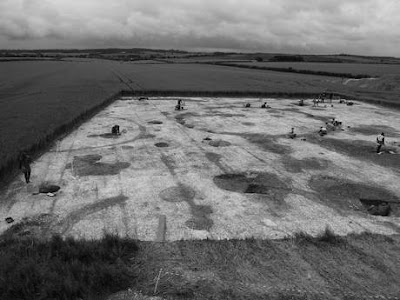 The burials were not found in a separate compound, but strewn around settlement of about 150 roundhouses, dating to between 100 and 10 BCE, likely people of the Durotriges tribe.

What does it all mean? The excavators connect the hybrid animal burials to legends of mixed animals like the chimera and the sphinx, which are otherwise pretty much unknown among the Celts. I don't know about that, but I'm afraid I don't have an alternative explanation. Baffling.
Posted by John at 8:53 AM