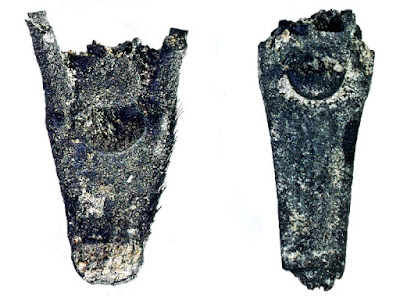 
Weeds are currently present in a wide range of ecosystems worldwide. Although the beginning of their evolution is largely unknown, researchers assumed that they developed in tandem with cultivation since the appearance of agricultural habitats some 12,000 years ago. These rapidly-evolving plants invaded the human disturbed areas and thrived in the new habitat. Here we present unprecedented new findings of the presence of “proto-weeds” and small-scale trial cultivation in Ohalo II, a 23,000-year-old hunter-gatherers' sedentary camp on the shore of the Sea of Galilee, Israel. We examined the plant remains retrieved from the site (ca. 150,000 specimens), placing particular emphasis on the search for evidence of plant cultivation by Ohalo II people and the presence of weed species. The archaeobotanically-rich plant assemblage demonstrates extensive human gathering of over 140 plant species and food preparation by grinding wild wheat and barley. Among these, we identified 13 well-known current weeds mixed with numerous seeds of wild emmer, barley, and oat. This collection provides the earliest evidence of a human-disturbed environment—at least 11 millennia before the onset of agriculture—that provided the conditions for the development of "proto-weeds", a prerequisite for weed evolution. Finally, we suggest that their presence indicates the earliest, small-scale attempt to cultivate wild cereals seen in the archaeological record.

The argument is not that this site represents "the origin of farming" or anything so dramatic. Rather, the idea is that occasional experiments with sowing seeds in disturbed ground went on for thousands of years before this evolved in agriculture. 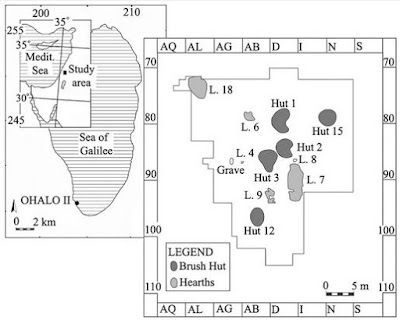 One interesting detail is that the next period of this site did not produce any evidence for farming of any sort. So if these people were farming, their descendants gave it up.


We suggest that the Ohalo II archaeobotanical remains indicate that the locals practiced small-scale cultivation, with no evidence for its continuation in the following period. Similar failed trials with new techniques are known from the history of technology.

But I am also fascinated by the notion that weeds have co-evolved with agriculture. Many weeds are species that populate river floodplains, colonizing ground disturbed by annual floods. How much did they have to change to become efficient colonists of plowed fields? The systematic plowing of a large part of the world's surface is one of the most profound changes humans have wrought on the earth.
Posted by John at 1:24 PM