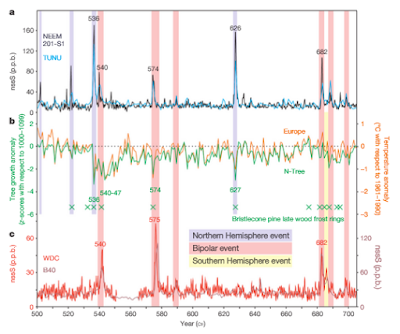 The year 536 was a strange one for weather in both Europe and China. Byzantine historian Procopius wrote


During this year a most dread portent took place. For the sun gave forth its light without brightness, like the moon, during this whole year, and it seemed exceedingly like the sun in eclipse.

The "536 event" was the start of two decades of cold weather, visible in tree rings and other records across the northern hemisphere. Along with the plague of c. 542, this double decade of horrible weather and crop failures may have hastened the decline of classical civilization across Europe.

All of this is in the news this week because of ice core data from Greenland. The people who study the Greenland cores have made a small adjustment of seven years in their exact chronology going back to 500 BCE, and the record now shows a huge volcanic eruption in 535 or 536 CE, just the sort of thing that would lead to hazy skies and a year or more of cold weather. A second major eruption followed in about 540; the two together could have caused a frigid decade.

Note that volcanoes have two opposite effects on the climate. Because they fill the atmosphere with reflective dust, in the short term they cool the planet, but because they release megatons of carbon dioxide, in the long run they contribute to warming. As the graph above shows, the twenty years after 535 were one of the coldest periods in the early Middle Ages, which was generally a cold era, so likely those years were a grim time in northern Europe.
Posted by John at 10:59 AM