The Ancient Star Chart in the Kitora Tomb, Japan 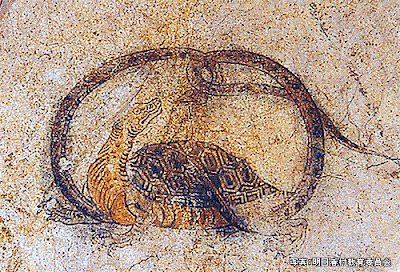 The Kitora Tomb, located near the village of Asuka in Japan's Nara Prefecture, dates to the 7th or 8th century CE. It is known for its paintings of the four cardinal animals of Chinese lore. Above, the black tortoise of the north. 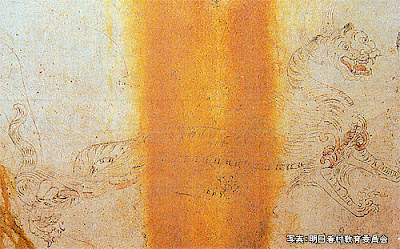 The white tiger of the west. 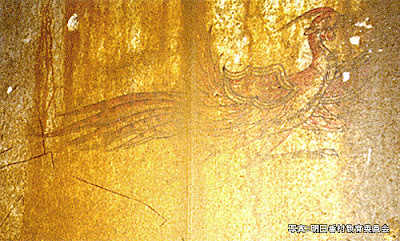 The red phoenix of the south. 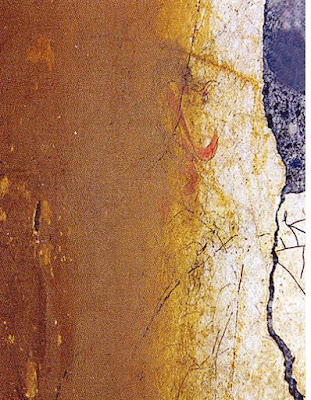 And all that can be seen of the blue dragon of the east. 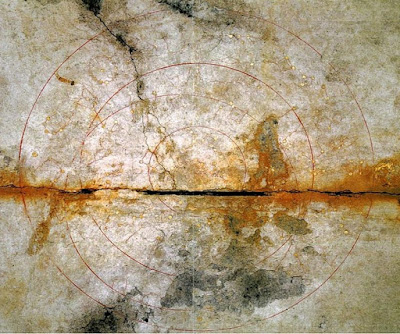 The ceiling of the tomb is decorated with a map of the night sky, charting 68 constellations, with the stars picked out in gold leaf. Three concentric circles are drawn in red, showing the movement of celestial objects, one of which is the sun. (click on this and you can see the stars) 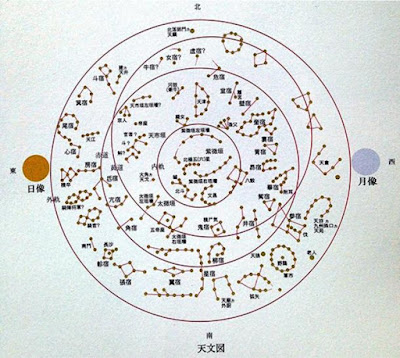 After staring at this map for decades, Japanese researchers have concluded that it is an accurate star chart, possible the oldest in the world. But it was not based on observation of the sky above Japan. It seems to be centuries out of date, and it depicts the sky somewhere hundreds of miles to the west. Of the two most recent publications on the tomb, one puts the date at between 240 and 520 CE, the other between 120 and 40 BCE; both agree that it shows the sky above northern China, in the area of Xian and Loyang. A third Japanese researcher who lectured on the matter back in 1999 agreed with the 120 to 40 BCE date, but thought the location was in Korea.

Archaeology, as Belloq says, is not an exact science. But anyway the experts concur that whoever decorated this Japanese tomb was working from a manuscript centuries old and imported to the island from mainland Asia, a little glimpse into the cultural connections that brought Japan into the orbit of Chinese civilization.
Posted by John at 12:19 PM