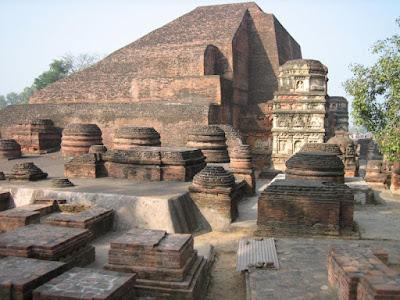 Nalanda was a Buddhist monastery in northeastern India that became a great center of learning and is sometimes now called the world's first university. William Dalrymple called it "the greatest repository of learning east of Alexandria." It has legendary roots going back to the time of Buddha, but its history begins in the fifth century CE under the Gupta Empire. According to Amartya Sen,


By the seventh century Nalanda had ten thousand students, receiving instruction not only in Buddhist philosophy and religious practice, but also in a variety of secular subjects, including languages and literatures, astronomy and other sciences, architecture and sculpture, as well as medicine and public health. . . .

Nalanda drew students not only from all over India, but also from China, Japan, Korea, Sumatra, and other Asian lands with Buddhist connections, and a few from elsewhere, including Turkey. It was the only institution of higher learning outside China to which any Chinese in the ancient world ever went for education. 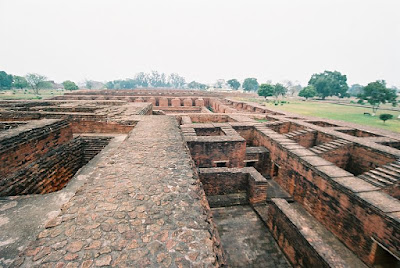 Our best descriptions of the monastery at its height come, as is often the way, from foreign visitors. The most detailed is by the Chinese scholar Xuanzang, who spent nearly two years at Nalanda in 637 and 642:


Moreover, the whole establishment is surrounded by a brick wall, which encloses the entire convent from without. One gate opens into the great college, from which are separated eight other halls standing in the middle (of the Sangharama). The richly adorned towers, and the fairy-like turrets, like pointed hill-tops are congregated together. The observatories seem to be lost in the vapours (of the morning), and the upper rooms tower above the clouds.

Xuanzang tells us that various emperors had assigned the revenues of 200 villages to support Nalanda. 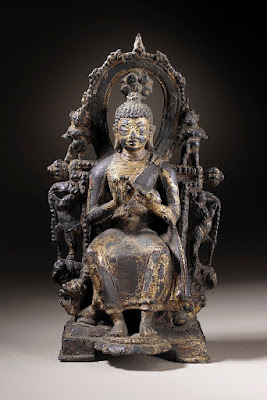 I was interested to read that just as in medieval Europe, a great emphasis was placed on disputation:


The school regularly arranged debates between people—teachers, students, and visitors—who held different points of view. The method of teaching included arguments between teachers and students. Indeed, as one of Nalanda’s most distinguished Chinese students, Xuan Zang (602–664 AD) noted, education in Nalanda was not primarily offered through the “bestowing” of knowledge by lecturers, but through extensive debates—between students and teachers and among the students themselves—on all the subjects that were taught.

Did that spread from India to Europe, or was it natural in a world with few books and many divergent opinions? 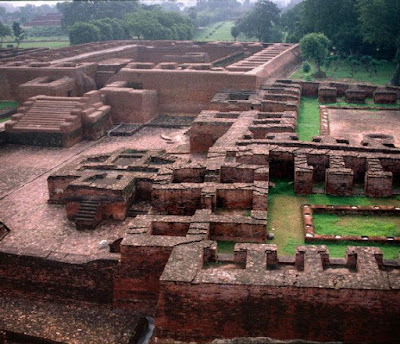 After 1000 CE, Nalanda began to decline, parallel to the decline of Buddhism in India. The final blow was delivered in 1200 by a Muslim captain named Bakhtiyar Khilji, who sacked the place and left it in ruins. 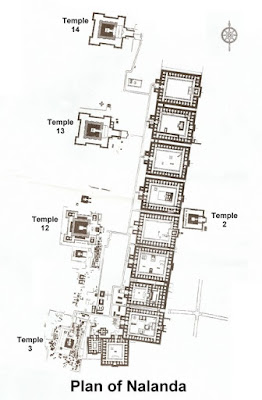 Archaeologists have been poking around the ruins since 1811, and modern work confirms the importance of the site. The plan above shows the center of the complex. To the left are the remains of four great temples, one of which is shown in the photograph at the top of the post. To the right of the main thoroughfare are ten monasteries all built to similar plans. 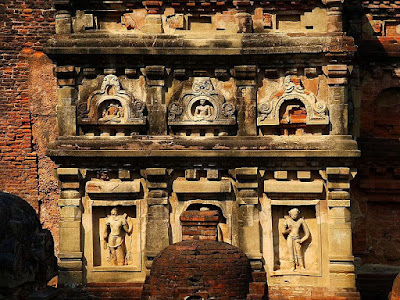 Nalanda has been in the news lately because of an ongoing effort to refound it as a pan-Asian university, recreating the ties between Asian countries that characterized the era of Buddhism's spread. From the time of Buddha until the 12th century, India exercised a great influence across Asia. Indian-style Buddhas can be seen everywhere from desert outposts on the Silk Road to Indonesia and Japan. Across the whole, vast region, home to half the world's people, scholars and monks looked to India for guidance, and hundreds of Buddhist scholars and seekers traveled to India to study. 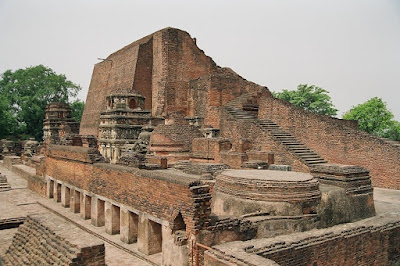 After Buddhism declined in India, losing both popular support and royal patronage, those links were broken. Now many Asians are looking to bring them back. For the past 300 years or so Asians looking beyond their own borders have looked to Europe or North America rather than to other Asian states, and many Asian intellectuals think it is time to abandon this colonial attitude. So the refounding of Nalanda has drawn support across Asia, notably in Singapore and Korea. Most of the money has come from the Indian government, but the board of visitors includes several members from other countries. Although the campus is still mostly under construction, the first classes at Nalanda have now been held. 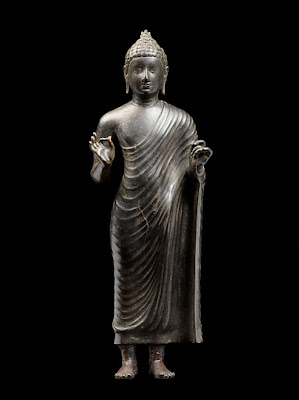 The first Chancellor of the university was Amartya Sen, Nobel Prize-winning economist and possibly the Indian academic best known in the west. Sen is a champion of secularism and internationalism, and he guided the university in that direction. When the new Hindu nationalist government took power in India -- led by a man Sen had said was unsuitable to be Prime Minister -- tension was probably inevitable. Now Sen has stepped down as Chancellor, leaving it open to question whether the new Nalanda will continue in the direction of international, pan-Asian studies, or whether the Hindu government will impose its own vision. 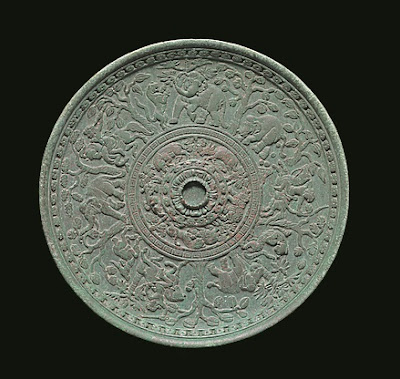 I learned all of this over the past two days, and I continue to marvel at the vastness of the world, and the amount of human history about which I know nothing.
Posted by John at 7:36 AM