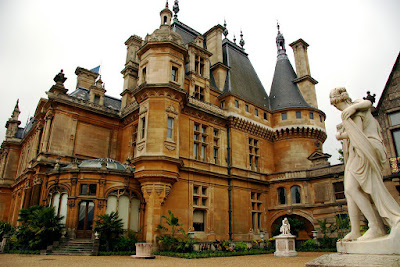 Looking through art and architecture blogs on tumblr this weekend I saw this picture posted on several sites, identified as Charlecote Park. But Charlecote Park is a rather severe Tudor construction, and this looks nothing like it. Curious, since I like this building so much, I started searching around, at first hitting a bunch of dead ends. I eventually traced it back to the travel blog of the man who took it, and from there identified it as Waddesdon Manor. 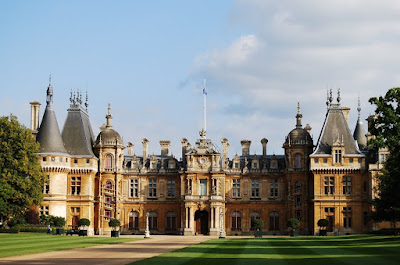 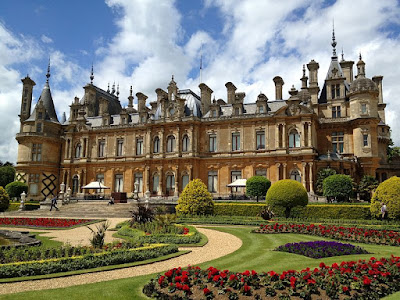 Waddesdon Manor comes up when you search for "Tudor Manor," but it is not. It was built for Baron Ferdinand de Rothschild (1839–1898) in the style of a French Renaissance château. The architect was Gabriel-Hippolyte Destailleur, who had previously worked on restoring a couple of original French Renaissance châteaux. It was built between 1874 and 1889. 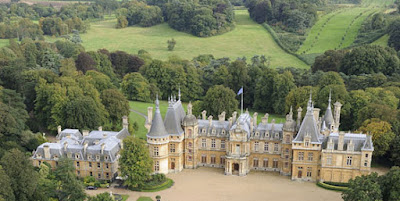 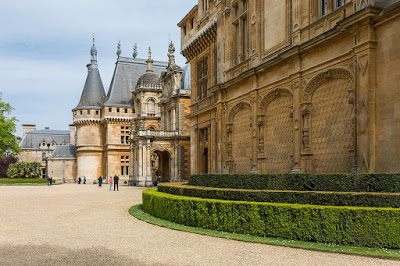 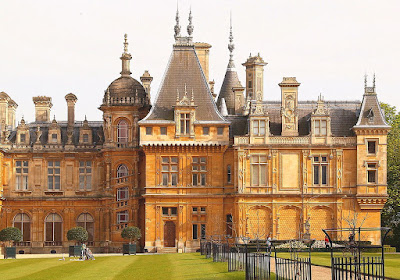 What an astonishing house. Sad to think that our current generation of robber barons will leave no legacies like this, since our architecture is so ghastly. 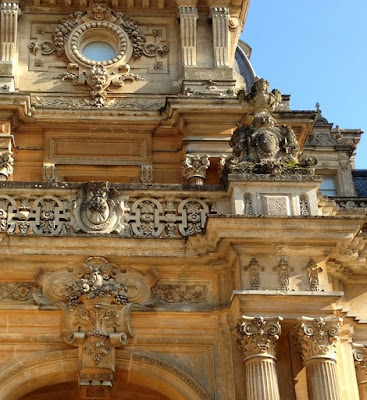 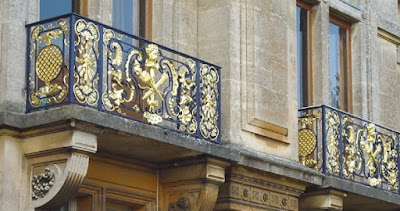 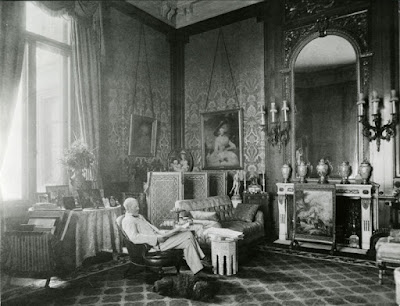 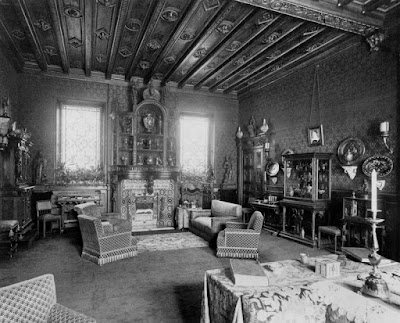 Nineteenth-century interior views. Although the outside had a Renaissance look, the house was in some ways very modern, with a steel frame and electric lights -- it was here that Queen Victoria first encountered electric lighting, and according to Rothschild family lore she spent ten minutes turning a chandelier on and off. 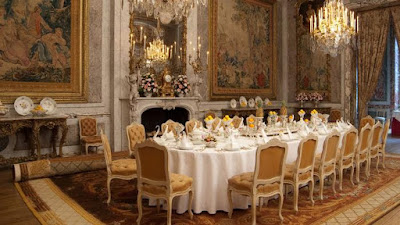 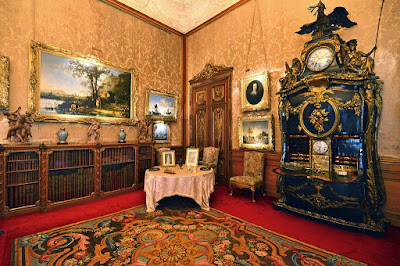 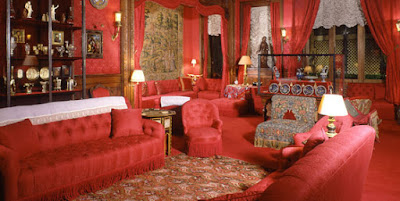 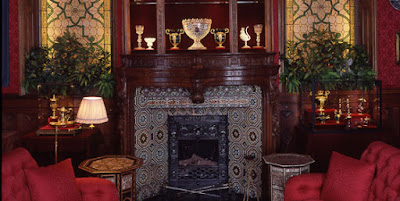 Two views of the Smoking Room in the Bachelor Wing, a whole wing of the house set aside for all-male gatherings. Much of the famous Rothschild collection of Renaissance arms and armor was displayed here. 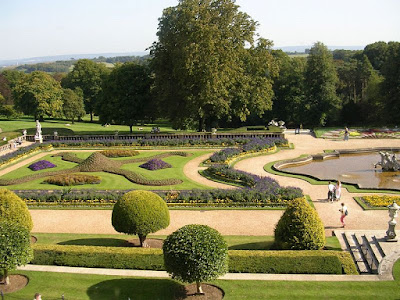 The last member of the Rothschild family to own Waddesdon was James de Rothschild (1878-1957). He bequeathed the house and its contents to the National Trust, and he also set aside a trust to maintain it. So it is still in marvelous condition, and visited by more than 300,000 people a year. 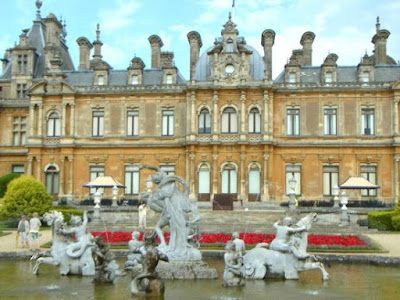 I know you and I personally disagree on architecture, so I've been reflecting on that fact and considering if maybe I could come up with a useful sort of discussion to have, rather than just vaguely dissenting unproductively every time I see posts like these.

I suppose my own failing is I don't quite understand what you find appealing about this sort of architecture. For myself, I realize I have biases against it that are largely external to the architecture itself - I dislike these sorts of buildings not chiefly for their own merits, but because they are for me emblematic of certain historical and societal trends and values that trouble me or that I disagree with.

I'm willing to concede there's a certain visual impressiveness to theses kinds of buildings - they're very clearly works of great effort and intention, and despite my disagreeing with the things I view them as standing for, I do suppose I can still respect the impressiveness of their very existence - particularly when I consider the challenges such constructions would have faced historically, without the benefits and conveniences of more modern methods and technologies.

At the same time, however, that very expenditure of effort and resources seems at least somewhat at odds with my own personal philosophy on how buildings ought to be constructed. I think a large part of my non-idealogical bias against such architecture is that it strikes me as wasteful, and I feel that we shouldn't be celebrating the luxurious palaces of the wealthy elite while the world is still so economically unbalanced and unfair.

But thinking on that reaction, I must wonder if perhaps that's only because I don't find the end result of these sorts of expenditures all that appealing? Do I perhaps unwittingly excuse the expenditure of similar amounts of effort and resources in other buildings if I personally found their designs to be more beautiful?

In thinking about that possibility, I realized I actually don't care for many of the buildings you might find listed online as "The Most Beautiful" or "The Most Impressive" in the world. Of those sorts, the ones I do seem to care for tend to be ancient historical sites, like the Hagia Sophia, the Potola Palace, Himeji Castle, and the like - and those are all arguably just as wasteful, ostentatious, and ideologically charged as many of the buildings I find myself repulsed by.

Am I perhaps making allowances for the fact that they appeal more strongly to my own tastes? Or could I perhaps be excusing them their flaws somewhat because of their greater age - giving them the benefit of having originated in vastly different times, and therefor not holding them to as high standards of judgement as I would to say, Victorian age works? Or could it be that my own personal rejections of Euro-centric philosophies and values are causing me to be overly biased against architectures that I view as products of such thinking?

And yet, I can find counterexamples and exceptions to much of these concerns. There is plenty of European architecture that I do enjoy - the crowded streets of Sevilla, the magnificent ruins of Rome, or nearly anything at all from Venice, for example. Not all modern structures fail to appeal to me either, as I must admit I rather enjoy scenes such as the skylines of Tokyo, Stockholm, and Sydney.

The one place I do feel I'm being somewhat hypocritical is in how I value the expenditure of effort and resources in the pursuit of "beuaty" or aesthetic appeal. I do have to admit, I'm more forgiving of this flaw in buildings that I personally enjoy looking at, so I'll have to work on counteracting that bias. As for the rest, I'm not sure yet and suppose I should reflect further...

My reaction to modern architecture has to do with how I feel in a contemporary city, next to a blank wall of concrete, with concrete under my feet and nothing around me but concrete, asphalt, and steel. To me this is ghastly, unnatural, downright cruel. To me there is just no difference between the average modernist building and a concrete Interstate ramp. To stand next to one is, for me, to be in a sort of purgatory. It deadens my senses, and depresses me.

I hate deserts, too. Droughts make me miserable. I'm not exaggerating.

I like life and color and swirling patterns. My garden is a disorderly riot of flowers. My office walls are covered with big collages of museum postcards and other little bits or art. I think it was William Morris who said, "Decoration is love." But whoever said it, it expresses my feeling about architecture.

It is true that the skyline of a modern city is impressive from a distance. But stand next to one of those buildings and you see nothing of the wonder, just concrete, glass, and steel. Modern buildings are works of sculpture that you need an airplane to appreciate; from the perspective of a mere human, there is nothing to see. The CCTV Headquarters building is a good example. The form is striking from a distance, but along two sides of the base all a pedestrian sees it a concrete retaining wall extending over head height. Zero consideration was given to what a person on the street sees or experiences. For me, that sums up modernism: "I have big ideas to act out here, so you little people just go on and get out of the way."

For me, the absence of any contemporary architectural style that doesn't seem ghastly to me and millions of people like me is a symptom of our age's sickness. In architecture there are (roughly speaking) two kinds of buildings, those that copy styles from before the 20th century, and those that are horrific. Why? In every other form I know about, contemporary art is very diverse, and there is much that I love. Why not in architecture?