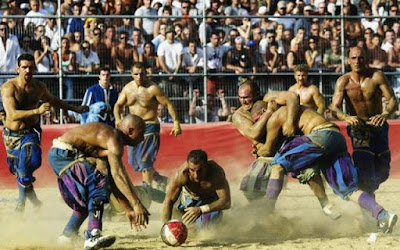 All our various "football" games -- soccer, rugby, American football, etc. -- descend from medieval games that were much like organized riots, played in town squares or muddy fields halfway between rival villages. I was thinking about this yesterday because the Times has a feature on one of the surviving relics of that old tradition, Florence's calcio storico:


This grand city has four historical quarters, each with a church at its center, and calcio storico, which is believed to date to the 15th century, is played by one team from each neighborhood. To play for your neighborhood team — to wear the Verdi (green) of San Giovanni or the Azzurri (blue) of Santa Croce or the Bianchi (white) of Santo Spirito or the Rossi (red) of Santa Maria Novella — is, as Niccolò Innocenti of the Verdi put it, “deeply Florentine.”

“When I played for the first time, the sensation I had was one of truly being a man,” he said.

For others, though, the attraction is more primitive. With two teams of 27 players placed in a sand pit and told, essentially, to do whatever is necessary to get a ball into the other team’s end zone, the sport is a strange mix of American football, rugby and street fighting. Watching it live, a more direct comparison might be to the children’s game Red Rover, but with punching and tattoos.

Brutality is everywhere. No player has died during calcio storico, but Luciano Artusi, a former director of the body that oversees the games, conceded that “we have had a spleen removed.” Filippo Allegri, one of the on-field paramedics, said that his group generally expects that seven or eight players from each team will not finish any given game and recalled, without prompting, that 10 players, or about 20 percent of the participants, required hospitalization after a particularly brutal final in 2013. There are no substitutions, so exhaustion is common. So, too, are dehydration and concussions. 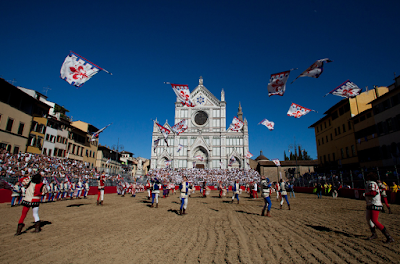 So far as I have been able to tell, these games are not attested before the 14th century. They seem to grow out of the medieval solidarity of villages, parishes, and guilds, rather than descending from ancient rituals.

This tradition of riotous games was carried over to colonial America. In Puritan Boston they played the pope destroying game; effigies of the pope were set up at either end of the Common, and teams from North and South Boston fought to tear down the other's pope first. In 1765 the South Boston team had been victorious three years in a row, so when Sam Adams wanted to organize riots against the Stamp Act the man he recruited was Ebenezer Macintosh, captain of the South Boston pope-destroying team.
Posted by John at 7:38 AM

Rough team sports seem to crop up in most heirarchical, warlike societies - from the Greeks and Romans, to the Aztecs and Mayans; from the Maori of Polyneisa, to the Hodenosaunee of New England. And in fact a great number of historical forms of warfare more closely resemble sports competitions than they do attempts at people killing each other.

There's probably some sort of biological component to it all - some lingering territorial posturing inherited from our ape ancestors, driving us to compete with rival factions to determine who can best assert their dominance through displays of physical prowess. I would imagine the only thing uniquely human about it all is the element of spectating.