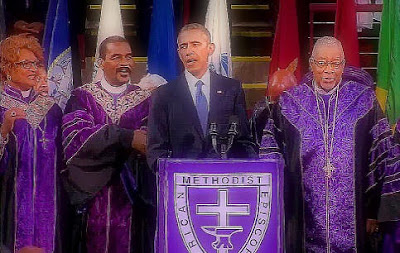 It is of the first importance for our civilization that we not be derailed by punks like Dylann Roof or Timothy McVeigh, that we respond first with superior force, and then with superior wisdom:


To the families of the fallen, the nation shares in your grief. Our pain cuts that much deeper because it happened in a church. The church is and always has been the center of African-American life -- a place to call our own in a too often hostile world, a sanctuary from so many hardships.

Over the course of centuries, black churches served as “hush harbors” where slaves could worship in safety; praise houses where their free descendants could gather and shout hallelujah -- rest stops for the weary along the Underground Railroad; bunkers for the foot soldiers of the Civil Rights Movement. They have been, and continue to be, community centers where we organize for jobs and justice; places of scholarship and network; places where children are loved and fed and kept out of harm’s way, and told that they are beautiful and smart -- and taught that they matter. That’s what happens in church.

That’s what the black church means. Our beating heart. The place where our dignity as a people is inviolate. When there’s no better example of this tradition than Mother Emanuel -- a church built by blacks seeking liberty, burned to the ground because its founder sought to end slavery, only to rise up again, a Phoenix from these ashes.

When there were laws banning all-black church gatherings, services happened here anyway, in defiance of unjust laws. When there was a righteous movement to dismantle Jim Crow, Dr. Martin Luther King, Jr. preached from its pulpit, and marches began from its steps. A sacred place, this church. Not just for blacks, not just for Christians, but for every American who cares about the steady expansion -- of human rights and human dignity in this country; a foundation stone for liberty and justice for all. That’s what the church meant.

We do not know whether the killer of Reverend Pinckney and eight others knew all of this history. But he surely sensed the meaning of his violent act. It was an act that drew on a long history of bombs and arson and shots fired at churches, not random, but as a means of control, a way to terrorize and oppress. An act that he imagined would incite fear and recrimination; violence and suspicion. An act that he presumed would deepen divisions that trace back to our nation’s original sin.

He didn’t know he was being used by God. Blinded by hatred, the killer could not see the grace surrounding Reverend Pinckney and that Bible study group -- the light of love that shone as they opened the church doors and invited a stranger to join in their prayer circle. The killer could have never anticipated the way the families of the fallen would respond when they saw him in court -- in the midst of unspeakable grief, with words of forgiveness. He couldn’t imagine that.

The killer could not imagine how the city of Charleston, under the good and wise leadership of Mayor Riley -- how the state of South Carolina, how the United States of America would respond -- not merely with revulsion at his evil act, but with big-hearted generosity and, more importantly, with a thoughtful introspection and self-examination that we so rarely see in public life.

Blinded by hatred, he failed to comprehend what Reverend Pinckney so well understood -- the power of God’s grace.

This whole week, I’ve been reflecting on this idea of grace. The grace of the families who lost loved ones. The grace that Reverend Pinckney would preach about in his sermons. The grace described in one of my favorite hymnals -- the one we all know: Amazing grace, how sweet the sound that saved a wretch like me. I once was lost, but now I’m found; was blind but now I see.

According to the Christian tradition, grace is not earned. Grace is not merited. It’s not something we deserve. Rather, grace is the free and benevolent favor of God -- as manifested in the salvation of sinners and the bestowal of blessings. Grace.

As a nation, out of this terrible tragedy, God has visited grace upon us, for he has allowed us to see where we’ve been blind. He has given us the chance, where we’ve been lost, to find our best selves. We may not have earned it, this grace, with our rancor and complacency, and short-sightedness and fear of each other -- but we got it all the same. He gave it to us anyway. He’s once more given us grace. But it is up to us now to make the most of it, to receive it with gratitude, and to prove ourselves worthy of this gift.

You can read the whole thing here.
Posted by John at 7:13 AM

Perhaps this is my sleep deprivation and underlying cynicism talking, but it's funny how the necessities of politics required the president to speak in broad strokes and blanket values, and to focus solely on Christian places of worship.

I wonder, if some psychopath attacked an African American mosque, would the response be at all comparable?

Surely to the numerous Muslim slaves of America's past, the center of their "African American life" was decidedly not a church? Surely America's mosques also served as "bunkers for the Civil Rights movement", even if for a separate, more problematic faction of it?

Surely Christian centers of worship alone do not hold a monopoly on being "community centers where we organize for jobs and justice; places of scholarship and network; places where children are loved and fed and kept out of harm’s way, and told that they are beautiful and smart -- and taught that they matter."

I understand the need for the president to appear to be a part of the broader victimized community, and to present the appearance of uniform solidarity without any troubling wrinkles or complexities - the nitty-gritty, untidy details of reality. But would more inclusive speech really have been so difficult to use?

I know Islam is treated as the boogeyman these days, but surely it need not even have been singled out? Instead of talking just about churches, why not talk about "places of worship for all faiths"? You don't have to go into more detail than that - and yet, it would be a nice tip of the hat to the entire spectrum of African American faithful, from the big religions like Christianity and Islam, to the smaller ones like Zoroastrianism and Vodoun, and even relative rarities such as Buddhism and Judaism.

And I'm saying all this as a white secular humanist!

Politics is a tricky game about carefully hedging everything you say to offend the smallest number of people possible, but I do really feel that even bearing that in mind, the president could have had a better, more universally inclusive speech written up.

It's a decent enough speech, and it does what it set out to do. I just wish it hadn't been played so safely, and had been bold enough to be more cosmpolitan in nature, striving to unify more than just a single community, but to bring together our many disparate communities, regardless of differences.