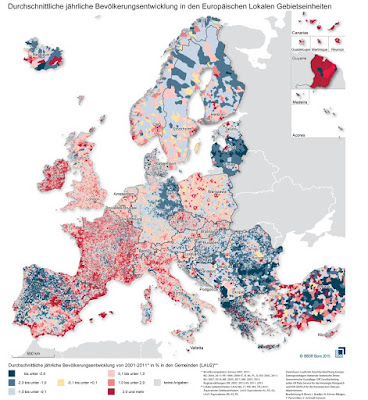 Detailed map from the German government showing population changes in Europe over the 2001 to 2010 period. Click to enlarge.

Some things to note: the large areas of dark blue (= population decline of more than 2% per year) in Albania, Bulgaria, eastern Germany, the Baltic states and rural Greece and Turkey; strong population growth in western France, Ireland, and in rings around many great cities, representing surging suburbs. In general there is much movement from rural areas to great cities, and from east toward the northwest.
Posted by John at 1:56 PM

The growth of cities and developed areas has always attracted the poor looking for better opportunities.

When the cities stop being able to support further growth, rural populations begin increasing again because they city no longer offers better opportunities. When conditions allow for the resumption of growth, cities once again draw migrants from rural regions. It's a cycle that has been with us for as long as cities have existed.