The Spaces in Between 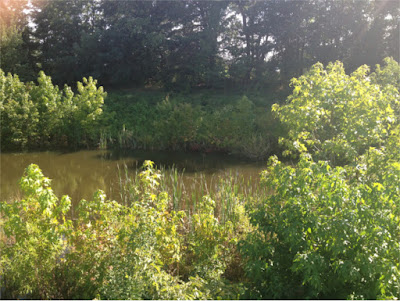 One afternoon last week I met an old friend for dinner. He was in from out of town, staying in a hotel in a patch of suburb called Spring Hill, Maryland. The hotel was actually in a little cul-de-sac where the only structures are three new hotels. This little neighborhood has highway along one side -- behind the trees in the back of the picture above -- and some commercial development on the others. I had a couple of errands to run before meeting my friend and I badly mistimed them, so I arrived an hour early. What to do for an hour in Spring Hill, Maryland? After reading for a while I got bored and tried to go for a walk. I explored the stormwater management pond and watched the dragonflies swoop around. A redwing blackbird was calling almost constantly, but I never saw him. 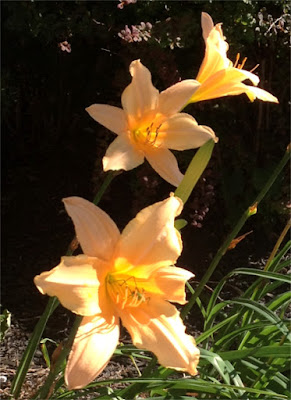 I noted the daylilies in the hotel garden. 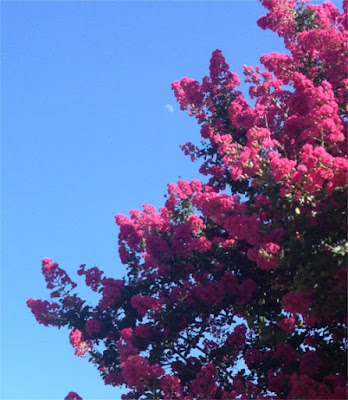 Saw the moon rising behind some crepe myrtles. 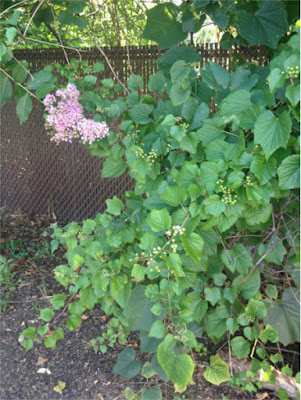 Was impressed by a mass of wild grape vines. 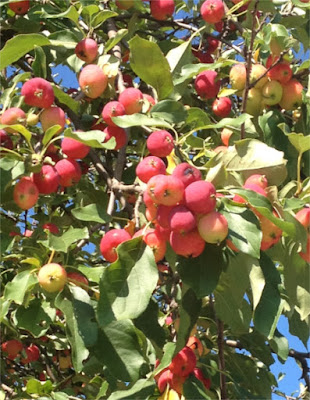 Admired a row of crabapple trees in full fruit. 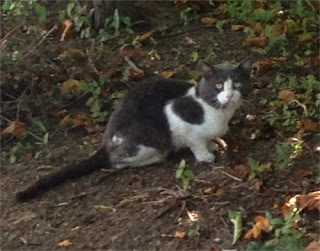 Then I startled this handsome fellow, who ran out from under a car and then paused long enough for me to take a blurry picture before he darted through a hole in the parking lot fence and disappeared. 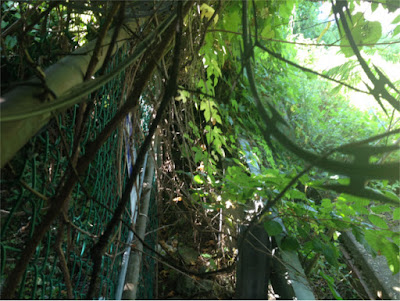 He ran into this little space, in between an old fence and some boards that had been leaned against it a decade ago. 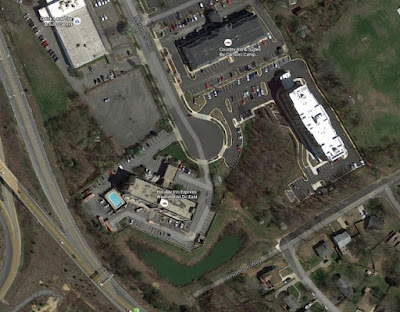 I have long been fascinated by the little patches of woodland left in the interstices of modern development. Around the three hotels were about 5 acres (2 ha) of woods, serving to separate the hotels from the highway and their parking lots from each other. Stepping into the woods where there was a gap in the greenbriar, I saw lots of bottles and dishes from the early 20th century slumping down the banks of a little stream, either the remains of a house or perhaps just a dump. This was not an old forest, but one that has grown up since the Depression, when many farms around here were abandoned.

Are these little woodlands impoverished places, dominated by a few species, many of them invasive? Or are they evolutionary laboratories where plants and animals are adapting to survive in close proximity to humans, with high tolerances for heavy metals and highway noise? I wish someone would write a good book about this. What lives in the miles-long strips of forest down the median strip of Interstate highways?

And what about human inhabitants? The gap in the fence that the cat used to flee from me was made by people, I imagine boys, since it was only tall enough to allow belly wriggling. I think it might predate the hotels, allowing access from the old woods and vacant lots into the back lot of an auto repair shop. I also found an old trail near the stormwater pond, worn deep enough to be visible even half overgrown with weeds.

Every place has a history, natural and human. I always wish I knew more about the world around me.
Posted by John at 8:29 AM

"What lives in the miles-long strips of forest down the median strip of Interstate highways?"

On I-95, as it runs through the Carolinas, at least? Spiders. For miles and miles, their massive webs litter the trees throughout much of the year. It's kind of surreal taking that stretch of highway - like something out of Mirkwood.