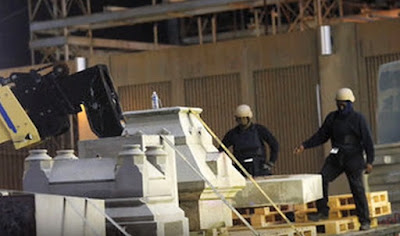 At 1:25 AM on April 24, under heavy police guard, a city crew wearing bullet-proof vests arrived to remove New Orleans' "Liberty Memorial", a weird scene the city says was necessary because of death threats against anyone involved in the removal.

This was the first of four Civil War monuments that mayor Mitch Landrieu wants gone and the "most offensive" (his words) of the four. The city council actually voted back in 1993 to declare the statue a "nuisance" and get rid of it, but they were persuaded to let it be re-erected in a less prominent place. The monument was erected in 1891 to honor an 1874 rebellion by the White League against the post-Civil War government of the state, and it glories in the triumph of Jim Crow:


McEnery and Penn having been elected governor and lieutenant-governor by the white people, were duly installed by this overthrow of carpetbag government, ousting the usurpers, Governor Kellogg (white) and Lieutenant-Governor Antoine (colored). United States troops took over the state government and reinstated the usurpers but the national election of November 1876 recognized white supremacy in the South and gave us our state.

So, yeah, pretty offensive, and I doubt there would  have been much uproar about just removing this one.

I think Civil War monuments in general present a hard problem for an America in which issues of race and opposition to national government are still so powerful. Most of them were set up by Jim Crow governments as a way of connecting their own policies with the dead heroes of the war, so in that sense they were always intended to be political documents. I think the uproar that surrounds them shows that they still are; the removal of the average non-Civil War monument hardly merits a yawn. Some of the outcry against the Louisiana monument removals has taken the tone that this is just our history, worthy or remembrance right or wrong. New Orleans businessman Frank Stewart:


I ask you, Mitch, should the Pyramids in Egypt be destroyed since they were built entirely from slave labor? . . . The Colosseum was built by slaves, who lived horrible lives under Roman oppression, but it still stands today and we learn so much from seeing it.

Though this argument is correct, I don't think it really captures the situation with Confederate memorials. When the issues are live and the wounds raw, sometimes historical remembrance has to yield.

I have always opposed the removal of monuments to the ordinary soldiers of the Confederacy, since so many of them just served because their communities called on them. Hundreds of thousands of them died, thousands were maimed, and if their home counties and states want to honor their memory that seems appropriate to me. I agree with Mr. Stewart that the Civil War is one of the central events in our history, and that to erase it entirely from our public spaces would be an Orwellian act. Monuments to soldiers is one way, to me one of the less potentially offensive ways, to keep that connection to the past. But that doesn't mean we should keep every memorial.

The other three monuments that New Orleans has slated for removal are statues of confederate generals Robert E. Lee and P.G.T. Beauregard and president Jefferson Davis. Personally I have never understood why there was ever a monument in New Orleans to Lee, who never gave a damn about New Orleans or anywhere else except Virginia. He thought secession was a terrible idea and only joined the cause when his own home state seceded. He spent the whole war trying to block the transfer of men or resources from the east, where the Confederacy was doing pretty well, to the west where it was failing. So removal would at least get the history closer to right. Jefferson Davis has pretty much come to stand for the Confederacy and its politics, so I can see why that has to go. 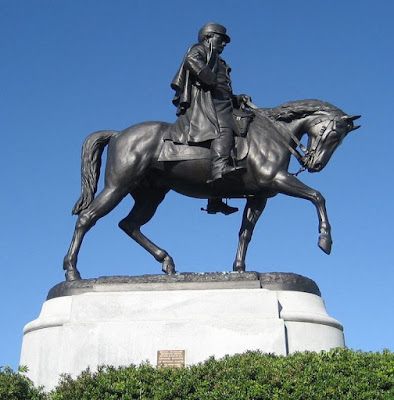 But to me Beauregard is a hard case. Pierre Gustave Toutant-Beauregard is one of Louisiana's most famous historical figures, his magnificent name an ode to the state's non-Anglo origins. His character was also considered at the time to be more French than American, full of hot anger, great passions, and grandiose schemes. He was a key figure in the war, commander in two of its most famous battles. Before the war he was a firebrand for secession, but afterwards he was what passed for a moderate in southern politics, working against reconstruction but supporting basic civil rights for black citizens.

Plus I'm just the sort of traditionalist who likes public squares with old elm trees and statues of generals on horseback. If this monument goes, what are we going to get in its place? Some abstract monstrosity?

So if it were up to me I would try to find some way to keep Beauregard, if not in New Orleans then in some other part of the state. But I believe in democracy more than I believe in most other things, so if that is what the citizens of New Orleans have decided it is really their business and not mine.
Posted by John at 8:32 AM

"Plus I'm just the sort of traditionalist who likes public squares with old elm trees and statues of generals on horseback. If this monument goes, what are we going to get in its place? Some abstract monstrosity?"

Well, you get what you pay for, and also what the majority approves of. If individual people particularly want to have a say in what replaces it, they can get involved in community discussions, help plan and design something better, and offer up their own money to help fund it.

Either way, though, if fewer people are bothered by the new monument than the old, even if it's an "abstract monstrosity", I'd argue that's undeniably an objective improvement, individual taste in aesthetics be damned.

@John, I'm partly sympathetic to your arguments about Beauregard, including your pleasure in his name, but it occurs to me that one could make similar arguments for a statue of, for example, Erich von Manstein--including his name, another enjoyably absurd aristocratic pile-up. Like Beauregard, Manstein was a striking personality and a man redolent of a certain time and place, and in some sense worthy, for those things, of being remembered, of not being consigned to historical oblivion. But, also like Beauregard, he was part of a history that is still alive, divisively so, and on the side that many folks still think is worth identifying, loudly, as the wrong one.

I find the von Manstein parallel interesting in a couple of ways. For one, the lack of monuments has not kept Manstein, Guderian, Rommel etc. from being famous historical figures much honored in some quarters, including among some of the Brits and Americans who fought them. So the monuments must be a separate issue from remembrance, which can perfectly well go on without them; this is an argument about the use of public space more than about how we remember the past.

One key difference is that Europe has decided to have done with Nazis and forget about ever accommodating their views on anything, and has mostly made this stick. But we can't get rid of white southerners, so we have to be able to live with them. That's why I'm always looking for compromises that make some kind of sense, viz., keeping monuments that simply honor the sacrifice of ordinary Confederate soldiers. I suspect that truth to my own principles means getting rid of Beauregard, but that makes me a little sad.

It's a salutary trick that we've managed to separate Nazis and Germans, so that most contemporary Germans do not identify as Nazi, and "Nazi" has become a slur that transcends nationality. Too bad we haven't managed to do the same with white southerners and their history--in large part, of course, because white southerners refuse to go along.

The Nazis were hounded, rooted out, and harshly held to task. White southerners were merely given a slap on the wrist, and allowed to go about their business with only the most basic enforcement of the most visible aspects of abolition and reintegration. While most Nazi organizations were forcibly disbanded, white southern groups like the KKK, the White League, and the Red Shirts were left alone. There were extreme consequences for being a Nazi in the wake of the WWII, but there were little to none for being a white supremacist in the wake of the Civil War.