Human Evolution and the Transitional Spine 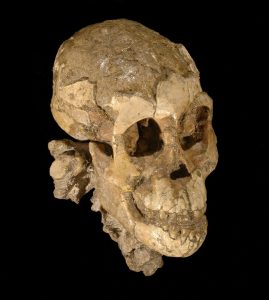 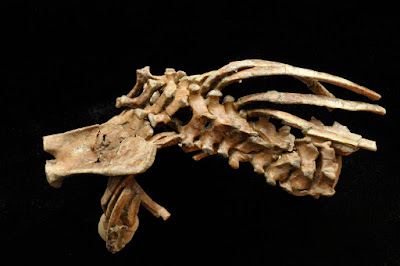 Selam is back in the news because the spine has been imaged at the European Synchrotron Radiation Facility, a technique can easily distinguish fossil bone from the surrounding sandstone matrix. The results show that while Selam shared many characteristics with chimpanzees, her spine already had some of the changes that humans evolved to walk upright. Specifically, she had 12 rib-bearing verterbrae rather than the 13 of apes. 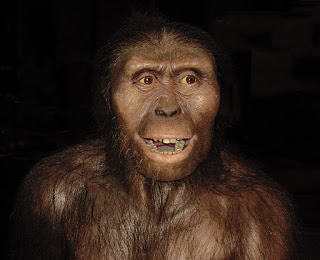 
A. afarensis had both ape and human characteristics: members of this species had apelike face proportions (a flat nose, a strongly projecting lower jaw) and braincase (with a small brain, usually less than 500 cubic centimeters -- about 1/3 the size of a modern human brain), and long, strong arms with curved fingers adapted for climbing trees. They also had small canine teeth like all other early humans, and a body that stood on two legs and regularly walked upright.

"Which gives me another chance to point out that complaints from creationists about the lack of "transitional" fossils are bunk."

Complaints from creationists can and should simply be ignored wholesale, because they're arguably insane and are simply not going to be convinced no matter what evidence you show them.

They're like flat-earth conspiracy theorists. You can have them test it easily and definitely themselves, measuring the shadow cast by a vertically level flag pole in New York City at noon, and comparing that to the shadow cast by an identical-length flagpole placed further south at Raleigh at the exact same time of day, and the test will show that the two poles will cast different length shadows, indicating that the earth must be curved. This is a proof that has existed for over 2000 years, since the time of Eratosthenes.

And yet, flat-earthers will still refuse to accept the results and begin moving goalposts, coming up with absurd notions that superficially attempt to explain any and all discrepancies.