And Now a Confederate Monument in St. Louis 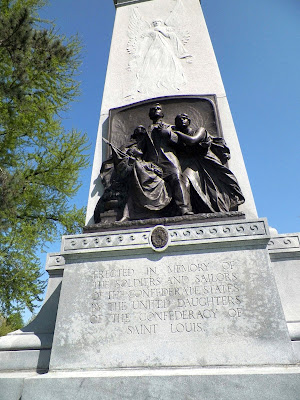 Good article on the brewing fight over the Confederate monument in St. Louis' Forest Park:


Tishaura O. Jones, the city treasurer, started a GoFundMe page to raise money for the monument’s removal. In about a week, she has gathered more than $11,000. She passes the memorial during her weekly drive to the grocery store, usually with her 9-year-old son in tow. “What I’m trying to do is set the record straight,” she said. “The Confederates, in my opinion, were traitors. And in this country, we honor patriots.”

Other St. Louisans are resisting the move, arguing that removing it would be tantamount to blotting out the history of the Civil War. Some have said that the enormous monument is too heavy and expensive to move, particularly when it doesn’t have an obvious new home. Still others say that the monument has rarely attracted attention for more than a century — why should St. Louis be caught up in a debate that, in their view, belongs to the Deep South?

“My first choice would be that everyone forget it was there, like before,” said George Stair, 77, who paused at the monument on an evening walk with his wife, Jane Yu, who agreed that it should stay.

Mr. Stair gazed at the sculpture. “I feel like it’s O.K. to honor ordinary soldiers,” he said. “People went to Vietnam even though they didn’t agree with it.”

In Missouri there is the additional point that although the state government remained in the Union, many citizens were Confederate sympathizers. About 110,000 Missourians served in the Federal army, and at least 30,000 on the Confederate side. Plus there were all those bushwhackers (Quantrill, Jesse James, etc.). So removing all Confederate monuments from the state could be seen as an attempt to wipe out that part of its history.

Incidentally I thought Pat Buchanan asked an interesting question the other day: when will statues of Sherman and Sheridan have to come down because of the horrible way they treated the Indians?
Posted by John at 6:18 PM

The actual content of the memorial in question is, in my mind, utterly inoffensive.

It offers no judgement, no moralizing, no justifications, and makes no excuses. It does not tell a narrative, and it has no point of view. The sole and only thing it invokes is memory.

The only possible grounds for offense I can conceive of is the mere fact that it invokes the memory of Confederate soldiers, and that alone is no crime against anyone or anything.

We have a moral duty to uphold truth in all its forms, and we can never fulfill that duty by unreasonably favoring one side of any given historical conflict over the other, no matter our personal feelings and sympathies in the present.