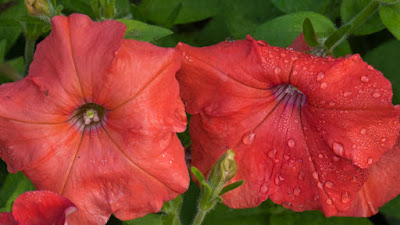 Back on May 16, the U.S. Department of Agriculture ordered the destruction of millions of petunias because lab tests showed that they are genetically modified. Somebody probably should have guessed, since most of the illegal petunias are orange, and that is not a color petunias naturally take. On the other hand some are purple, which is one of the traditional colors, so I don't know what's up with that. Anyway the same varieties are also being sold all over Europe, or were until EU agriculture officials discovered them and started their own massacre; it was scientists in Germany and Finland who figured out that they contain genes from corn (maize).

The "authorities" keep reassuring people that the petunias are not dangerous. It's just that you can't sell any genetically modified organism until it has undergone extensive testing and received a permit, and these don't have a permit. The story refuses to die, though, because these petunias have been sold for years all over the world, and people are starting to wonder: how did genetically modified petunias end up being bred and sold by the million for at least three years without anyone knowing? Anti-GM fanatics in Europe have been really agitated, putting out warnings about the possible threats to wildlife and the like:


Genetic engineering can have many unexpected effects so without proper testing it is impossible to say that these flowers will not cause any harm.

Which is sort of an absurd threshold – can you prove that you will not cause any harm? – but you have to give one to the anti-GM forces on this. Agribusiness and their government allies have always said that genetically modified organisms will be tightly controlled and tested, etc., to which the anti-GM crowd responded with genie-out-of-the-bottle rhetoric: once these techniques are developed and commercialized, who really knows how they will be used? And here we are with millions of manifestly not tested, not approved orange petunias. Most likely they are pretty safe; surely somebody would have noticed by now if they killed bees or went feral in a really invasive way. But how many other genetically modified plants are being sold, and how long will it be before one turns out to have some bad effect?

I wonder if these popular petunias will really disappear from garden centers. I just checked and it looks to me like you can still order them online. Will a black market emerge in forbidden orange petunias? 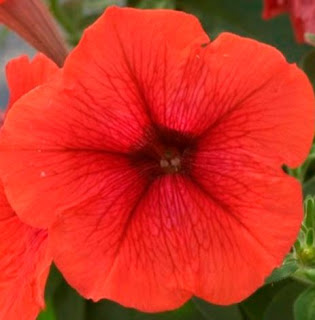 Meanwhile, let us ponder for a moment the names of the petunia varieties the USDA has banned:

Hells Bells? I always thought of petunias as sweet old lady flowers. Perhaps the breeders are trying to branch out? Or is this the variety for badass grandmas? Or maybe did this grower know or suspect that this particular variety contained forbidden genes, and was trying to warn us?
Posted by John at 7:26 PM