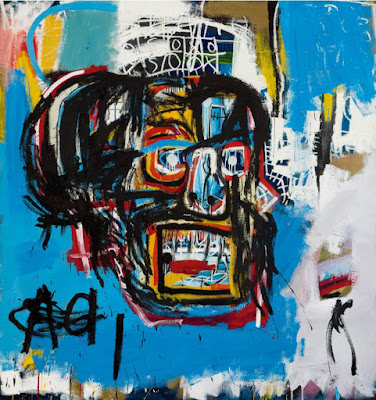 An untitled Jean-Michel Basquiat painting from 1982, just sold at auction for $110.5 million. That makes it one of only 11 paintings to have sold for more than $100 million and the most expensive work ever by an American artist. The buyer was Japanese billionaire Yusaku Maezawa.

I think Basquiat is kind of interesting, and his success doesn't enrage me like that of, say, Jeff Koons. But it seems obvious to me that the paintings are secondary, and what really matters is the story. Basquiat was the Brooklyn-born son of Haitian and Puerto Rican immigrants, a precocious child who dazzled his elementary school teachers with ten-second drawings, a graffiti artist discovered sleeping on the street and made into an overnight art world star before his death from an overdose at 27. He came out of the 70s ferment that also birthed hip-hop culture, a world that fused elite critiques of Eurocentric capitalism with street rage, outside-the-lines creativity, an intense obsession with cool, and a willingness to steal ("sampling" in music, collages in art) anything the artist found useful. He was a graffiti artist partly because it was illegal, and to get attention in that milieu you had to break rules and take risks. The risks he took killed him, but not before they made him famous. It feels more like a parable than a real biography. Big money art buyers, I think, are really after a piece of that parable, a memory of the cool rage era from which Basquiat sprang.
Posted by John at 7:55 AM