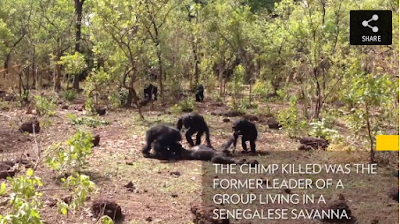 National Geographic has a splendid article and a short video on the case of Chimpanzee murder in Senegal I wrote about back in January.

Recall the story: Foudouko was the alpha male of this troop, but then fell from power after his chief lieutenant was badly injured. Driven out of the troop, he lived alone for nearly a year, then returned and spent the next few years hanging around the edges of the troop, keeping out of the way of the new leaders. The new alpha male, of Foudouko's generation, welcomed him back, but


the young males who had chafed under his rule were far less sympathetic. They regularly chased Foudouko out of the community, assailing him with strange calls the researchers did not recognize.

Before dawn on the morning of June 15, 2013, Jill Pruetz and her assistant Michel Sadiakho heard noises from about a half-mile away from their camp: a band of chimpanzees rapidly moving to the south from their nesting site, calling out in an uproar. Pruetz, ill with malaria, couldn’t go see the hubbub, leaving Sadiakho to run after them.

What Sadiakho saw devastated him. Foudouko, who was around 17 years old, lay there dead, his hands covered in bite marks and scratches—implying that two other chimpanzees had held him down as others beat his head and torso. A gaping wound on his foot, perhaps a bite, had peeled back much of the skin and likely led to severe blood loss.

As morning came, Pruetz and her team watched many of Fongoli’s male and female chimpanzees harass—and partially cannibalize—his body, tearing out his throat and biting at his genitals.

Fascinating. Chimpanzee cannibalism has been documented before, always in cases like this, part of the mutilation of an enemy's body. Except that in this case the "enemy" was part of their own troop. It strikes me as a gesture of contempt; you are no longer one of us, but merely food.

Love the detail about the strange, unrecognized call.

National Geographic has more on this troop of chimps here.
Posted by John at 8:07 AM

This post makes me wonder, what is the range of possible fates for fallen alphas? Do many end up killed or killed-and-cannibalized? And if this case is unusual, or perhaps a typical result in some portion of cases (20%? 50%? 70%), then I wonder what conditions can produce the different outcomes. Was he particularly resentment-producing as an alpha, and was this because of cruel excesses, or weakness, or what? Was his behavior after his fall more a factor? What factors enabled the young males to go after him? Did he alienate the females, and this incited the young males, or were the issues purely intra-male? How will the inability to prevent the fallen alpha's death affect the new alpha's standing?

Can you get a fallen alpha who is still respected or beloved? Is there such a thing among chimps as a respected grandfather figure? How about among the females?

Since all the stories on this incident say chimpanzees rarely kill members of their own troop, murder can't be the most common result. I remember from reading Jane Goodall that one former alpha became her buddy and hung around her house a lot.

And now I have discovered that wikipedia has a long page on the Kasakela chimpanzee troop, the one studied by Goodall and others since 1960. So you can look up the careers of all the alpha males. One example:

Goblin (September 1964 – August 2004) was Melissa's oldest son. He was discovered by Goodall when he was just a few hours old, with a twisted face that led her to name him Goblin. Goblin was protected by Figan as an adolescent, but at the young age of age 15 in 1979 he challenged and defeated Figan to become the top-ranking male. He was defeated and brutally beaten by a coalition of older males later in the year, giving up his top ranking. Goblin regained the top-ranked position in 1982, and was the unambiguous alpha male, able to control even coalitions of rival males, by 1984. Goblin maintained his alpha status until 1989, when he was badly beaten and injured by a coalition of males led by Wilkie. He was sterilized by a bite to his testicles in the process. He spent time away from the rest of the community recovering from his injuries, during which time Goodall administered medication to help him return to health. After recovering from his injuries, Goblin maintained a high-ranking status within the community by forming alliances with the alpha males, especially Freud and Frodo. He eventually died of disease in August 2004.