Germany's Aims in World War I 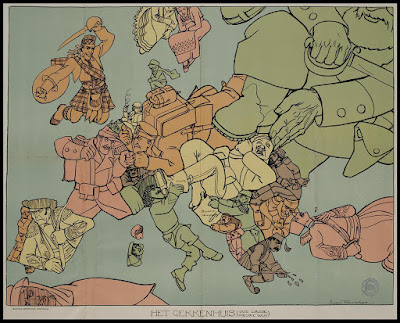 When my eldest son was about eight he asked me, "Dad, what was World War I about?" I was stumped; how to explain such a convoluted story to a child? I finally settled on, "It was about who was going to be boss in Europe."

Support for that view comes from this little item in the Times, originally published by the International Herald Tribune on May 12, 1917:

The writer (a Privy Councillor), who allows it to be understood that these aims are also those of persons occupying positions of authority, says that no cession of territory will be demanded from France except a small strip of land near Metz, which is unconditionally required by the military authorities.

As to Belgium, the writer says — “We should receive as guarantees all the railway communications, posts and telegraphs and telephones, which must come under German management. The Belgian coast must be strongly fortified, and Belgium, moreover, must enter into an economic and Customs union with Ger­many. “We ought to dispense with war indemnities, as I am of opinion that England will never be prepared to pay an indemnity, and that France, Russia and the others — Japan of course excepted— will not be able to pay anything.

“Courland and Lithunia will be annexed from Russia. As regards Poland, it is possible that we should negotiate with Russia. “In the Balkans, Bulgaria must obtain the whole of the Dobruja and Ser­bian Montenegro, and parts of Serbia around Nish, so that she would gain access to Hungary. From the remainder of Serbia and Montenegro one State would be formed, possibly under the rule of Prince Mirko (the King of Montenegro’s second son—who went over to the enemy).”

“To Russia the passage through the Dardanelles, even for warships, would be conceded, and by this means we should achieve a rapprochement between Russia and Germany.”

“Of our colonies we can demand back the Cameroons, Togoland and East Africa. It appears doubtful whether we could get back West Africa, as the Boers make claims to this region. To these portions of Africa must be added parts of the Congo State, which Belgium must cede as compensation for the money we have expended on Belgium.”

No coherent policy lies behind this omnium gatherum of demands, beyond a desire that Germany be recognized as the winner of the war and the leading power in Europe. Other German officials put out other lists of demands, equally arbitrary.

Since there is a lot of folklore out there about how badly Germany was treated after the war, and how this bad treatment led inevitably to World War II, etc., it is worth emphasizing that France and England were always ready to accept peace on the basis of the status quo ante, and that what prolonged the war was the German leadership's insistence on receiving concessions that would recognize them as the victors.
Posted by John at 7:53 AM

Hear, hear. And this doesn't even get to some of the bizarre fantasies the Kaiser and the militarists began to voice in late 1917.

That said, I can talk about this stuff to my students all I like, and they'll still wax eloquent in their papers about how sad and put-upon and victimized Germany was by Versailles. I'm reading several of these right now. So much for the idea that a college education can change people.

Would you argue that the Treaty of Versailles did not, in fact, victimize the Germans? Because some of the terms were really quite extraordinary.

One could well argue that the Germans were overly stubborn, arrogant, and belligerant, and that if they had only been more reasonable, things wouldn't have ended so badly for them.

But whether you believe they "earned" or "deserved" the harsh treatment they eventually received, it was in fact still harsh treatment, and it did in fact lay the groundwork for the second world war. Numerous non-German comentators at the time felt it was an awful treaty which practically guaranteed a resumption of hostilities with the next few decades, and they were proven correct.

Just because a given course of action is justifiable doesn't mean it's the correct one to take. Just because someone "earns" a particularly severe punishment doesn't mean that it wouldn't be far wiser to be more lenient and merciful, given certain circumstances.

For me, the issue is less the treaty itself that the lachrymose pity-poor-Germany that I encounter all too often from my students. Really, there have been times, places, and peoples much, much worse off than the Germans in 1919, and defeated powers that have been treated much, much more harshly than Germany was after WWI--let's start with Germany after WWII--and nothing like the Third Reich came out of those experiences.

As for the treaty itself, my impression is that many of its terms could have been eventually negotiated away by wise German statesmanship--as Stresemann was in the process of doing on several points before he died.

Of course nothing like the Third Reich came out of the aftermath of World War II. It was a completely different scenario. The entire country was occupied and partitioned by foreign powers.

Fascism only managed to develop in Germany after the first world war because the rest of Europe was busy concerning themselves with other matters, and figured letting the Germans re-arm, defy international treaty, and annex a bunch of their neighbors was preferable to other options like risking Communists or Socialists coming to power in the region - especially since the rest of the world was also coping with the unprecedented problems of The Great Depression at the time.

In stark contrast, after the second world war, Germany was never left to their own devices again until the end of the Cold War.

In the West, we enacted the Marshall Plan and rebuilt the German economy, in order to prevent the sort of economic strife that led Germans to radicalize and turn to militant nationalism and Fascism in the first place. We wrote their new constitution for them (but reserved our own special constitution rights over the FRG, just in case). We organized their politics, rewrote their laws, oversaw their military, and exerted a huge amount of influence over their country for nearly half a century.

It may be, as you claim, that the Germany of 1919 was in a better spot than the Germany of 1945, but certainly the Germany of 1929 was far, far worse off than the (West) Germany of 1955. And whereas militant nationalism was basically ignored in Germany after the first war, we knew better than to make that mistake again after the second, and did everything in our power to prevent such an outcome ever reoccurring.

The difference in policy is strikingly clear, and yet it's still a lesson many of us have failed to learn. When you defeat an enemy nation, and then choose to leave it in ruins and poverty, you sow the seeds for future conflict and continued hatreds. But when you instead invest in helping to rebuild their country, you stabilize the reason and work to turn a hated enemy into a staunch ally.

This dedication to rebuilding is a large part of why Germany and Japan have been our steadfast friends ever since, and our subsequent failure to continue the pursuit of such policies in other wars is a large part of why places like Iraq and Afghanistan remain in states of unending, unwinnable war decades later.