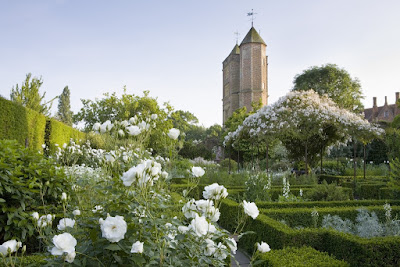 Sissinghurst Castle in Kent is forever famous as the home of the writer and diplomat Harold Nicolson and his wife, Vita Sackville-West. They were friends with all the best literary people in England and very much style setters, besides having perhaps the most successful gay man-lesbian woman marriage in history. Both had multiple affairs, but according to their son's memoir they were affectionate and always supportive of each other. One of the things they did together was to create the garden at Sissinghurst; he made the overall plan and she picked the flowers and arranged the plantings. 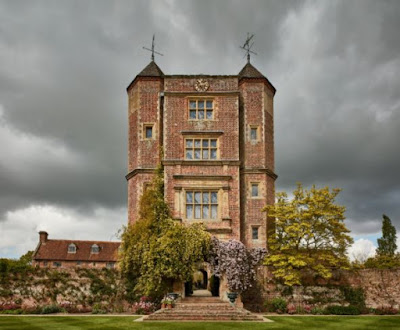 Sissinghurst is an ancient place. The name would mean "Saxon wood," and in this part of England most "woods" were maintained as places to fatten pigs in the fall. There was a manor house by the 11th century, and Edward I (Longshanks) spent the night in 1305. In the 1490s the place came into the possession of the Baker family, who were privy councillors to Henry VIII and important in various other ways. It is known that Sir John Baker built a new gate house in the 1530s. His son, Sir Richard Baker, greatly enlarged the house and probably built the peculiar tower that now mainly serves for taking overhead views of the garden. Queen Elizabeth I spent three nights here in 1573. 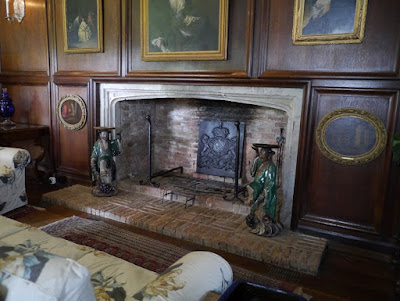 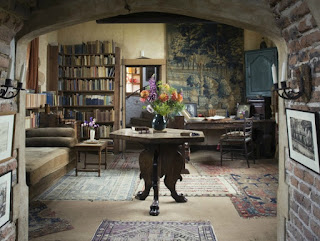 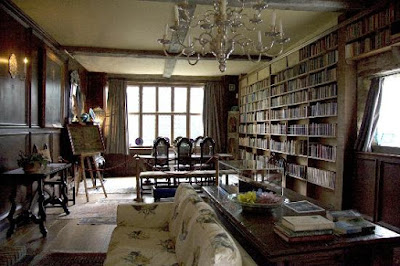 Interior photography is forbidden, but you all know how much effect rules like that have on our contemporaries, so there are plenty of pictures online. Mostly dim and furtive, but you can still get the idea. And the idea I get is very late Victorian. That looks like a William Morris tapestry in the library, which is still stocked with first editions of nineteenth- and early-twentieth century classics. 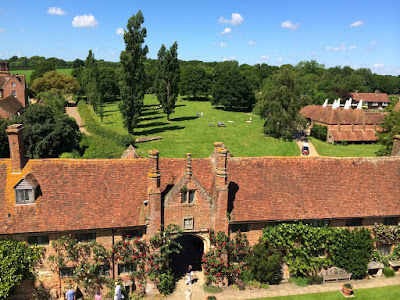 Besides the gardens, Nicolson and Sackville-West also restored the farm and equipped it with modern tractors and livestock and so on. Those are oast houses in the background of this picture, for the hops that are one of Kent's most important crops. This strikes me as another very nineteenth-century thing. For all their sexual modernity, the owners were improving farmers in the best Victorian way, and decorated as if it were still 1885. I suppose this is partly an aristocratic thing, since the gentleman farmer tradition is still strong among the British upper crust; in our day Prince Charles is one of Britain's leading improving farmers. 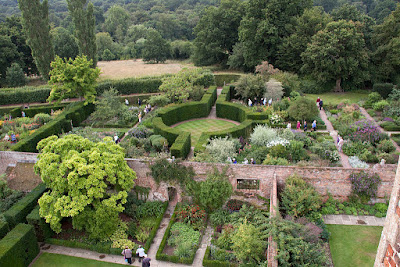 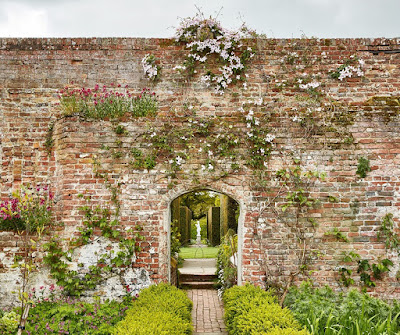 But the glory of the place is the garden. Nicolson laid it out as a series of "rooms" divided by walls and hedges, with cleverly placed gates between them opening onto surprising views. 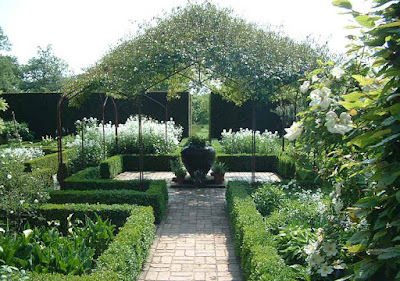 Sackville-West made each room a garden in a different style. Some parts are formal with rectangular beds and neatly trimmed hedges, 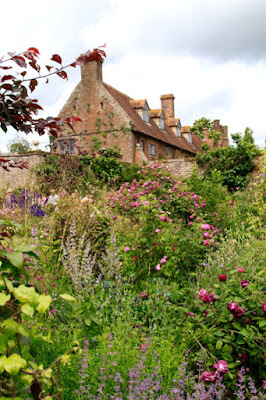 while in others the flowers run nearly wild. 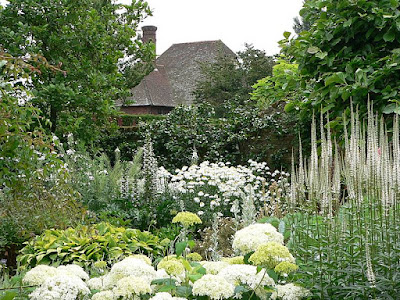 The most famous room is the White Garden, which started a fad for white gardens that is still with us. Actually it might just as well be called the Green Garden, since Sackville-West made much of different shades and shapes of leaves. 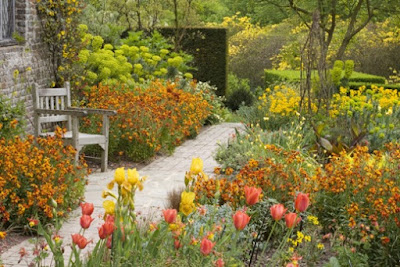 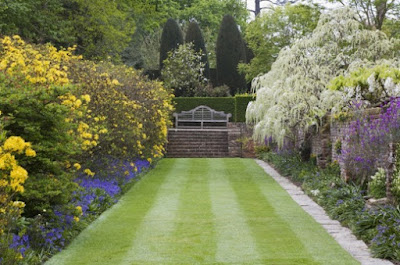 But fear not, other parts are riots of color. 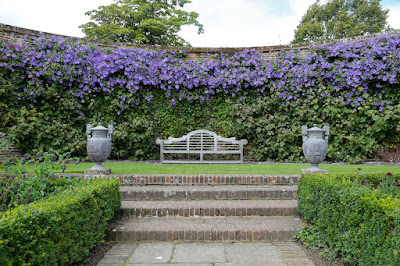 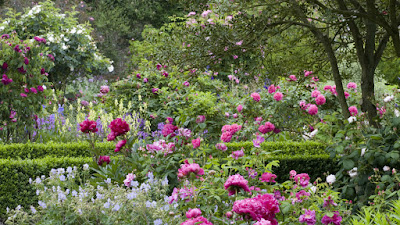 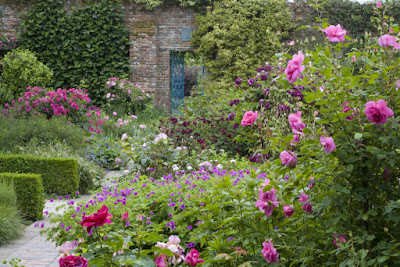 The garden can be crowded, especially when the famous roses are at their peak. But be warned: there are thousands, possibly millions of photographs of these roses online, and the sun is shining in about ten of them. One of the down things about life in Britain is that spring is a damp season, and bright spring days are a rarity to be treasured. 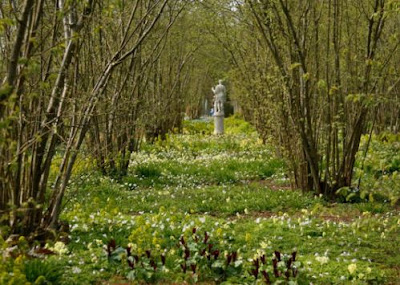 Other parts of the gardens are less rigorously maintained, like the orchard and the nuttery. What a splendid place, overwhelmingly beautiful and echoing with old traditions lovingly maintained. 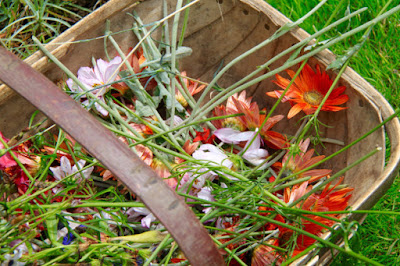 Were Nicolson and Sackville-West sexually modern? A marriage based on an "understanding," but that follows the forms, strikes me as old-fashioned, even reactionary--especially if it's among the wealthy and well-born. Modern would be if they turned their sexuality into a politicized, public "identity," with culture critics writing about whether their marriage made them self-hating, etc., etc.

Then, if they were around today, NicSack would become a meme, and we'd get clickbait comparing their butts.

I think of them as very Victorian, too, but Sackville-West has become a sort of lesbian heroine.