So Much for Infrastructure

Trump ran on a promise to invest a trillion dollars in American infrastructure. And if you look at the new budget's 10-year projections, you see a line item of $200 billion for the "Infrastructure Initiative." Not a trillion, but at least a substantial sum, right? Sadly no. Scanning the rest of the budget, you see the following cuts over ten years: 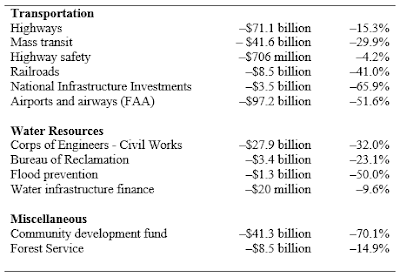 That adds up to more than $300 billion in cuts. If something resembling this budget is actually enacted, Trump will no doubt trumpet the Infrastructure Initiative as a big deal – no, a HUGE deal – and give speeches at some of the big project groundbreakings. But all the money and then some comes from cuts to infrastructure programs in other parts of the budget.

Honestly I don't think anything like this budget will emerge from Congress, because it makes big cuts in programs like the FBI and the State Department that have powerful Republican friends. But Trump's team is just caught in the scissors of budget math and Republican promises. If you want to 1) cut taxes, 2) preserve Defense spending, Social Security retirement programs, and Medicare, and 3) pretend to care about the deficit, you essentially have to eliminate the rest of the government.