A Monument to Peer Review 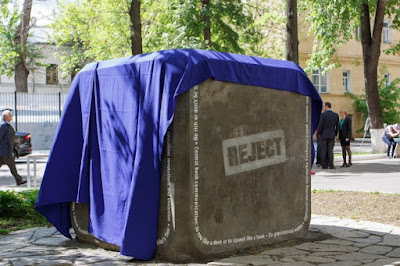 
On 26 May, a good-humoured crowd of more than 100 people — including students, researchers and Russia’s deputy minister of education and science — gathered outside Moscow’s Higher School of Economics (HSE) to witness the unveiling of what is probably the world's first monument to peer review.

The sculpture takes the form of a die displaying on its five visible sides the possible results of review — ‘Accept’, ‘Minor Changes’, ‘Major Changes’, ‘Revise and Resubmit’ and ‘Reject’.

Last year, the director of the HSE’s Institute of Education, Isak Froumin, had asked his faculty for ideas about how to turn a useless block of concrete outside the university into something attractive and meaningful.

I don't know if peer reviewers deserve a monument, since so many of them seem to be terrible at what they do, but this process is vital to modern scholarship in good and bad ways. When we say that contemporary science is, say, biased against climate change skeptics, or against people who believe in big differences between male and female brains, these attitudes become operational through peer review. Because the peer review process is so fundamental to scholarship, the shared attitudes, prejudices, and beliefs of scholars shape their fields. Fortunately among the widely shared attitudes is boredom and a desire to see something new, so the bias against revolutionary results is not as great as you might suspect. But the community of scholars makes its will real through peer review.
Posted by John at 8:55 AM