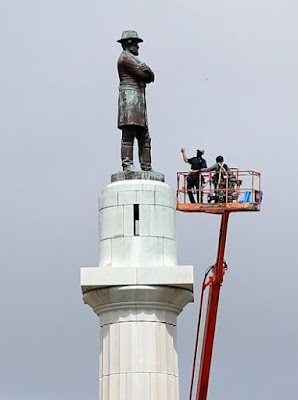 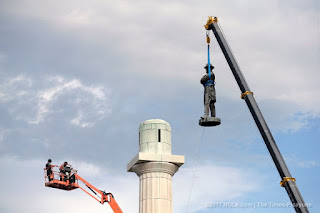 New Orleans has finished removing the four Confederate statues targeted by the city government. Protests and publicity did not deter them. That's Robert E. Lee above, the last to go. They did this one in daylight, having decided that the protesters were no real threat. Nighttime removals of Beauregard and Davis below. 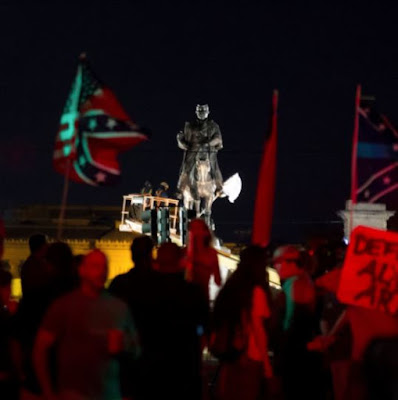 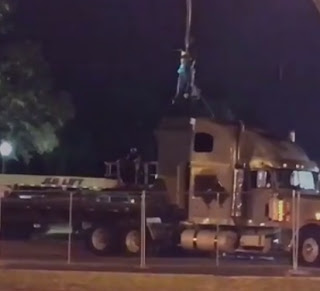 The anti-removal forces weren't the only ones out on the streets; below is an image of the march organized by the pro-removal folks: 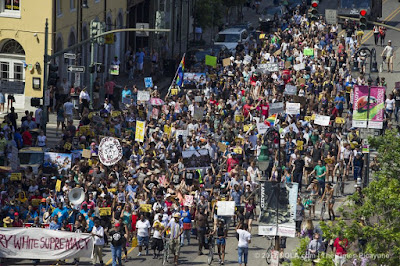 I'm puzzled by the banner in one of those nighttime photos. It looks like it's got a Confederate battle flag on one side and the Stars and Stripes on the other. If so, it would be an interesting example of the basic nature of contemporary southern conservatism--like a vehicle with two bumper stickers, one saying "The South will rise again" and the other "America: love it or leave it."

As I'm sure you realize, the assertion is that the South was and is the real America, and that contemporary flag wielders are defending real America against northern radicalism just like their ancestors did.

These people decided to "protest" one of the removals by LITERRALLY forming a torch-carrying mob. Let that sink in for a moment.

Now stop and realize the kind of people who would form a torch-carrying mob in this day and age probably represent a good quarter of the national population.