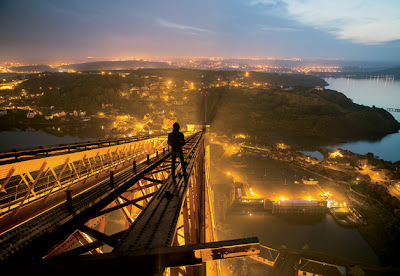 I love this sort of thing. For his dissertation,


Bradley Garrett conducted a deep ethnographic study of a small crew of self-described "urban explorers" who over several years had infiltrated an astonishing array of off-limits sites above and below London and across Europe: abandoned Tube stations, uncompleted skyscrapers, World War II bomb shelters, derelict submarines, and half-built Olympic stadiums. They had commandeered (and accidentally derailed) an underground train of the now defunct Mail Rail, which once delivered the Royal Mail along a 23-mile circuit beneath London. They had pried open the blast doors of the Burlington bunker, a disused 35-acre subterranean Cold War-era complex that was to house the British government in the event of nuclear Armageddon. The London crew's objective, as much as any of them could agree on one, was to rediscover, reappropriate, and reimagine the urban landscape in what is perhaps the most highly surveilled and tightly controlled city on earth.

The catch-all term for these space-invading activities is "Urbex," and in recent years it has grown as a global movement, from Melbourne to Minneapolis to Minsk. The Urbex ethos was, in theory, low-impact: no vandalism, no theft, take only photographs; as one practitioner put it, "a victimless crime."

People who get upset about this are just grouchy spoilsports. Obviously all those pronouncements about "reappropriating the urban landscape" are hooey; these folks do it for fun. And why not? Who are they hurting? Sure it's dangerous, but so is climbing mountains. Not that I'm arguing for making trespassing legal; I suppose the risk of getting caught is part of the thrill. But when the police devote resources to rounding up these guys, based on their web postings -- as Scotland Yard recently did -- their priorities are way out of whack. Lots more pictures and stories at GQ. 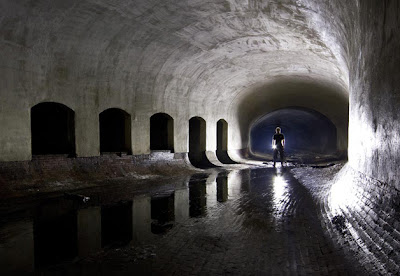