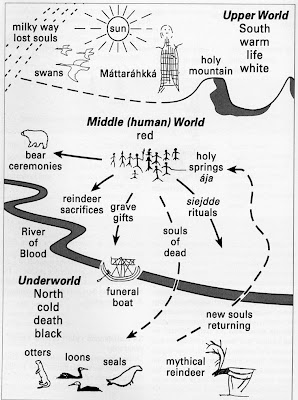 Inga-Maria Mulk is an archaeologist from northern Sweden, and I assume at least part Sami (Lapp) herself. She wrote this in a little piece for Past Horizona on Sami rock art:


As with other northern Eurasian peoples, for the Sami the cosmos consisted of upper, middle and lower worlds. The Upper World was associated with the South, with warmth and life, and with the colour white. It was the domain of both the Sun (always female gendered) and the Earth Mother figure (Máttaráhkká). The Middle World was the everyday world in which we live, associated with the colour red. People shared this world with special liminal creatures such as bears. Through sacrifices and rituals, humans were able to gain access to these other worlds.

In Sami myths, a River of Blood separates the Middle World from the Underworld. Across this river the souls of the dead must cross after death, while at birth new souls come back from the Underworld to the land of the living. Sinister diving creatures like otters, loons and seals can travel underwater to the Underworld, which has associations with the North, cold, the colour black, and with bubbling springs and deep caves.

Very similar to the.cosmos of many American Indians. 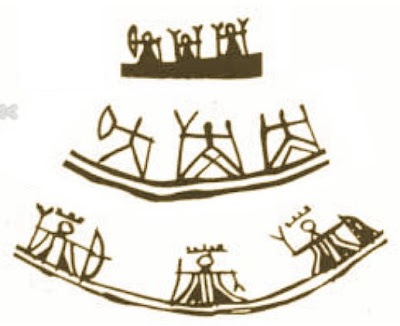 Drawings from shamans' drums of the three daughters of Máttaráhkká, who are related to the Norns or Fates of the Indo-Europeans. 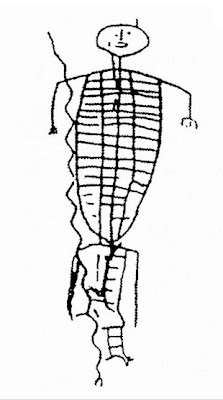 Ancient rock carving of Máttaráhkká giving birth to her half reindeer son Mjandasj, next to the River of Blood.
Posted by John at 6:35 PM