Dirty Hippies and Respect for Authority 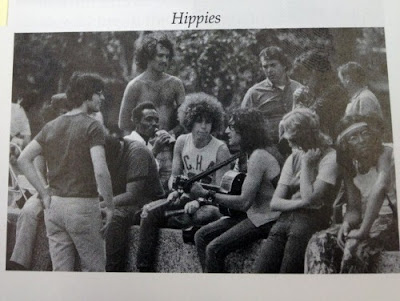 What really motivates people to become young earth fundamentalists? To deny the overwhelming evidence of evolution, and especially to think that the earth is only a few thousand years old, means putting a lot of effort into convincing yourself of nonsense. Why is it worth it?

I have long been fascinated by this question. It came up in another way this week, because of the new school voucher program in Louisiana. Governor Bobby Jindal's plan allows students to use state funds to attend almost any school, including many run by conservative Christians. This has led the separation of church and state crowd to look into what those schools teach and peruse their textbooks. The gleanings are showing up all over the web. You get a lot of the stuff you expect, like


Bible-believing Christians cannot accept any evolutionary interpretation. Dinosaurs and humans were definitely on the earth at the same time and may have even lived side by side within the past few thousand years.


A few slave holders were undeniably cruel. Examples of slaves beaten to death were not common, neither were they unknown. The majority of slave holders treated their slaves well.

But I am more interested in some items not in "the evolution and communism bad, capitalism and Christianity good, slavery and the Klan not so bad as you have heard" nexus. Especially interesting, in the light of my original question, is what one of the fundamentalist history textbooks (America: Land I Love) says about the 1960s:


They went to Canada or European countries to escape being drafted into military service.

Many young people turned to drugs and immoral lifestyles; these youth became known as hippies. They went without bathing, wore dirty, ragged, unconventional clothing, and deliberately broke all codes of politeness or manners. Rock music played an important part in the hippie movement and had great influence over the hippies. Many of the rock musicians they followed belonged to Eastern religious cults or practiced Satan worship.

The revulsion at dirty, out of bounds, rule-breaking people really shines out. You saw a lot of these reactions to Occupy Wall Street, even from moderates like Michael Bloomberg, who shuddered at all those unwashed bodies and worried out loud about a plague of rats.

And here's another telling line:


Several of [Emily Dickinson's] poems show a presumptuous attitude concerning her eternal destiny and a veiled disrespect for authority in general.

"Authority in general" -- what a fascinating phrase. It is somehow connected to God and salvation, but also to neatly groomed men in suits or uniforms, to truths that are old and time tested, to the humble respecting their betters, to the Old Law and the Old Way and the majesty of the State. An obsession with the Constitution is the secular equivalent of Biblical fundamentalism --the truth exists, you disgusting little boy, so quit asking questions and memorize the scripture. One text book produced by Bob Jones University gives us the straight medieval take on political authority:


God's original purpose for government was to punish the evil and reward the good. . . . All governments are ordained by God.

This attitude extends well beyond politics. Consider this gem:

Got that? The Truth comes from God, and is absolute, whatever your slovenly math professors say, and it is accepted without question by neatly-dressed respecters of the police, the army, and the Constitution who hate dirty hippies. Your own thoughts are unimportant and possibly distracting, so stuff them. And wipe the mud off your shoes.

Evolution and the age of the earth are side issues, trivial except insofar as they embody an attitude of reverence for unquestioned, unquestionable Truth. This Truth is our only bulwark against the forces of dirt and disorder, against plagues of rats, against Satanic Rock Music, against children questioning their parents and wives questioning their husbands and complete social collapse. Fundamentalism is the belief that the Truth was written down once and for all time, and to deviate from it by one jot is to risk a slide into dirty, muddy, disgusting, ill-mannered Islamic Communist Anarchy. Only reverence for authority can stave off the darkness. So listen up, hippies! Take a bath, cut your hair, sit up straight, stop singing those Satanic songs, put that appalling sign in a trash can (neatly), follow the rules, obey the law, and knuckle under to God and the Man.
Posted by John at 11:34 AM

An ironic twist on the Christians hating HIppies thing is that the Hippies embodied many of the core teachings of Jesus himself and His lifestyle of anti-materialism, anti-churchism, anti-usury and anti-establishmentism.