That's a Lot of Lava 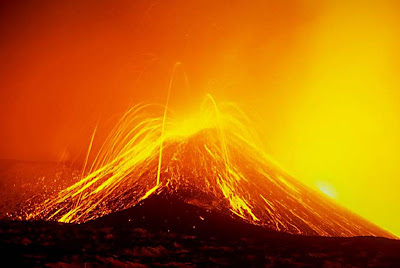 One of the biggest mass extinctions took place 200 million years ago, at the end of the Triassic period. At least half of all species on land and in the sea went extinct, opening the way for the dinosaurs and giant reptiles of the Jurassic and Cretaceous. This event is related, we think, to the break-up of the supercontinent Pangaea. But how did that event cause extinctions?

One of the theories has long been that enormous volcanic eruptions were the killers. A team of geologists published new data supporting the volcanic hypothesis:


In a new study published today in the journal Science, researchers say they have confirmed that eruptions large enough to bury the U.S. under 100 meters of lava occurred at the same time that vast numbers of plant and animal species disappeared from the fossil record. About 201 million years ago, tectonic forces started ripping the supercontinent known as Pangaea apart, said Terrence Blackburn, a geologist at the Carnegie Institution for Science in Washington, D.C., and lead author of the study. The underlying mantle rock melted, generating these large eruptions, he added. The rift, which eventually created the Atlantic Ocean basin, happened between sections of Pangaea that would go on to become North America and Africa. These huge eruptions, or flood basalt events, occurred during four periods over 600,000 years, but it’s the first bout of volcanism that contributed to the death of so many organisms, said Blackburn. 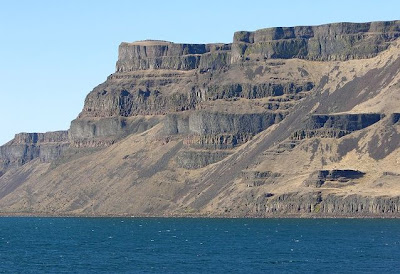 The eruptions began in what is now Morocco, and within 12,000 years they had spread all along the opening rift, leaving basalt deposits covering much of northeastern North America. Eruptions on such a scale -- we're talking 1 million cubic kilometers of magma -- would poison the atmosphere and extinguish most animal life. The picture shows a flood basalt deposit along the Columbia River.

This brings home to me how lucky we are to be here. An event like this would be far beyond our adaptive capabilities, even now; had one taken place within the last 20 million years, our ancestors would have been wiped out.
Posted by John at 10:57 AM