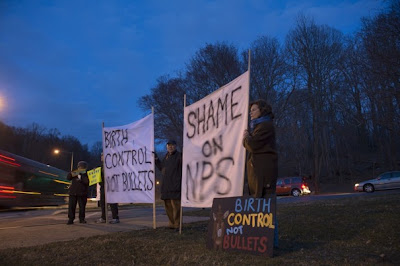 It strikes me, as a random thought, that in a vowel-free alphabet like Hebrew or Arabic "culling" and "killing" would look exactly the same. Which would probably be a good thing, since the distinction is meaningless. The National Park Service, after decades of anguish, is finally carrying out controlled hunts on its overpopulating deer herds. Some of the neighbors of Rock Creek Park in Washington brought suit to stop them, but a judge sensibly ruled that the laws setting up the NPS give them very wide latitude to manage their lands in the nation's interest. The hunt is going ahead this week. The shooting is done by professional assassins who are not allowed to show a hint of pleasure, because for some reason deer hunting as sport is horrifying to the sort of people who protest deer hunts. The hunters have set up where they are firing down into valleys, so stray bullets won't continue into the surrounding neighborhoods. The NPS expects that 60 to 70 deer will be killed this week. Which is not a lot, considering that the estimated population density in the park is a 60 to 70 per square mile (the Post has 60 to 70 per acre, which would be rather horrifying), or more than 200 in the park. NPS biologists think an ideal density would be less than 20 per square mile, so this hunt won't even get them close.

I was just reading the introduction and summary of the Environmental Impact Statement the park prepared on this issue, and it notes that in the whole decade of the 1960s there were only four reported deer sightings in the park. Now there are probably 400 a day. The deer population has exploded across eastern North America, to levels that disturb wildlife biologists and give botanists nightmares.

The signs outside Rock Creek Park this week said "Birth Control not Bullets." I would support deer birth control if it worked, but so far nobody has been able to make it work. The only effective method is to capture and sterilize does (like we do for feral cats), but since deer populations are in the millions the cost to really control the population is too great. The Rock Creek Park EIS says that in the future they will use deer birth control when effective methods become available, but for now they will have to hold another hunt every year.

For better or worse, the world we live in is of our own making. If natural means "without human interference," there hasn't been a natural ecosystem in the world for 13,000 years. Just stepping back and letting nature take its course is not going to recreate some lost balance. If we care about the health and diversity of our forests, we have no alternative but to manage them.
Posted by John at 8:15 AM