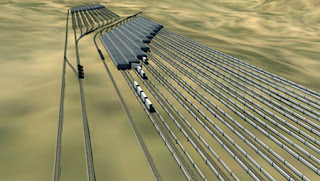 Wind and solar power are great when the wind is blowing and the sun is out. But when they aren't?

Because of this problem any electrical system relying heavily on wind and solar power needs a lot of energy storage. Energy storage has been part of our grid for decades, related more to fluctuations in demand than in supply. The most common technology has been to pump water uphill when power is plentiful, store it behind a dam, and then let it flow back downhill, through turbines, when power is in short supply. It works great, provided you have a lot of water. But much of our energy demand, and our solar power, are in places like Los Angeles and Phoenix where water is in short supply. So utility companies have been experimenting with other systems -- flywheels, compressed air, even batteries. All have problems.

Now a company called ARES -- Advanced Rail Energy Storage -- thinks that they have the solution: trains. When power is plentiful their system would use it to send heavy trains up steep hills; when power is needed, the trains would roll back down. Their trains would be based on automatic heavy hauling systems used by mining companies, so most of the technology already exists. There is no loss of power during storage, since potential energy never decays and trains don't evaporate. We have gotten very efficient at building train tracks after 170 years of experience, so initial costs are lower than for some other alternatives, such as flywheels. Of course there is some environmental impact, because you have to build a rail yard in the desert somewhere, but you could use an area already heavily disturbed by mining. Water demand, one of the biggest factors in storing power for LA or Las Vegas, would be very low.

Intriguing.
Posted by John at 9:42 AM