Hugo Chavez, Capitalism, and the Poor 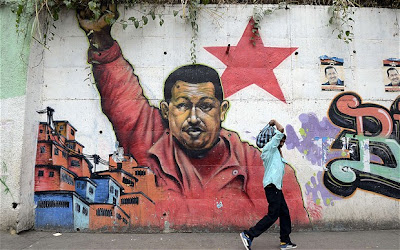 It drove Hugo Chavez's enemies crazy that he kept winning elections. To them he was a transparent demagogue, a tyrant who wanted to control everything about his country from the media to the kitchen table, an economic idiot, a man of grandiose transnational ambitions who squandered his nation's oil wealth in search of worldwide prestige and continental revolution.

Yet he did win elections, resoundingly; he was a tyrant, but an elected one. Among his country's poor citizens he was enormously popular and remains so. I think this is an important point, and one we ignore at our peril.

What Chavez's enemies failed to see, what many capitalist leaders around the world fail to see, is that things look different to poor people. To most poor people, there is nothing just about the existence of riches and poverty side-by-side. That some people should be rich while others are poor is, to many humans, a horrible crime. This is especially true for peasants and people not long removed from peasantry, who tend to view anybody's extra wealth as something stolen from the common store. When peasants get the right to vote they often support populist Robin Hoods. Hungry people don't want to hear about equality of opportunity; they want food, and if it is taken by force from the rich who scorn and oppress them, so much the better.

I have never thought that there was anything especially just or fair about capitalism, and it is far from natural. (Imagine explaining to an eighteenth-century Melanesian that the owner of a boat is neither the man who sails it nor the man who built it, but some investor who has never even seen it.) The system as it exists has been rigged, I believe, to give the rich an unfair share of the rewards, and it enrages me when people who have never done anything to justify their wealth (e.g., the Koch brothers) drone on about how the money they inherited is "theirs" and taxation is simply theft.

The thing is, capitalism works. Hugo Chavez' Venezuela can serve as Exhibit A in the failure of socialism to really benefit the poor people he wanted to help. Economic growth in Venezuela under his rule was about 3 percent, despite very high oil prices. Most poor Venezuelans are still poor, even according to the Chavez government's own figures. The contrast to the booming, mostly capitalist economies in Chile and Brazil is stark. Leftists like to explain this away as the result of machinations by Chavez's enemies both at home and abroad. And there is something to this; rich Venezuelans have been moving as much of their money out of the country as possible, and refusing to invest at home. But, well, that's how rich people act when the government seizes their companies, and el Presidente spends most of his weekly talk show trashing them for greed and lack of patriotism.

If you really care about the fate of the poor, it seems to me, you have to support some form of capitalism; it just has a better record of lifting people out of poverty than any other system. But there are many different kinds of capitalism, and the laissez faire kind emphatically does not work the best for poor people. The system must be arranged, by the state, so as to benefit the majority. Is that unfair? Well, too bad; if the mass of the people feel that the system is not benefiting them, they will give their votes to populist demagogues who will take "your" money and give it to them. In Venezuela in the 1980s and 1990s, the system simply was not benefiting the mass of Venezeuelans, and both political parties were awash in scandal. The rise of Chavez shocked the Venezuelan elite, who thought the poor saw the world the way they did. Ha.

People who care about freedom, especially economic freedom, should spend their days figuring out how to make sure as many people as possible benefit from prosperity. If you retire to your fenced compound and say, "the hell with those lazy beggars," one day they will show up at your gate with a warrant (or a tank), and if you can't get out of the country fast enough you will trade your mansion for a nice jail cell. Franklin Roosevelt understood this better than any other American leader, but really this idea has been part of our national consensus ever since. Lately, though, some Americans have forgotten, and their response to rising inequality has been to shout louder about their "right" to keep every penny they earn for themselves. After a decade of stagnation and rising inequality, we got a little taste of where this will lead from the Tea Party and Occupy Wall Street. If we don't stop worrying about how to keep all of our "own" money, and start thinking about how to make the system work for everyone, things will get a whole lot worse. Ask the Venezuelans.
Posted by John at 9:08 AM

How... odd that as I read this column my Spotify playlist produced Simon and Garfunkel's Richard Cory!