Deer Out of Control in Britain 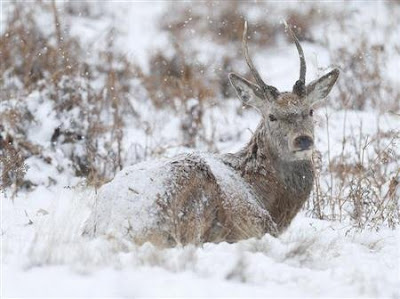 On the other side of the Atlantic, the same problem with deer over-population:


Current efforts to control Britain's increasing deer numbers are not enough to stop populations spreading out of control, research by the University of East Anglia showed on Thursday. There are now more deer in Britain than at any time since the Ice Age, the scientists said. Without natural predators, populations are continuing to rise, causing a serious threat to biodiversity. High numbers of deer can threaten woodland birds, carry infections such as Lyme disease, damage crops and cause road traffic accidents.

This latest study looked closely at a large forest reserve in Breckland, East Anglia, where there has been a major "deer management" effort. These scientists found that while the population in the forests was stable, that


was only because thousands of deer are pushed out to the surrounding countryside each year, helping to drive the further spread of the animals.

As in every other article you see on deer populations, this one mentions the lack of "natural predators." But for the past 13,000 years, the main predator of deer in Europe and America has been us. The predators that filled that niche before we came along don't even exist any more. So it is just silly to imagine that bringing back wolves or something could solve this problem. The only answer, at least until somebody works out a really effective system for deer birth control, is to shoot them by the thousands. Which is an even less popular idea in Britain than it is in America.
Posted by John at 1:02 PM