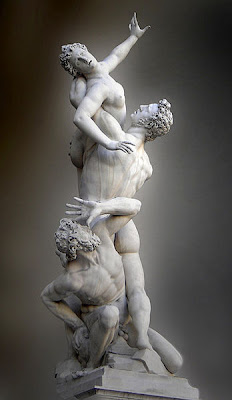 Sculptor Giovanni Bologna's (alias Giambologna or Jean Boulogne, 1529-1608) most famous work is called The Rape of the Sabine Women. This marble masterpiece, now in Florence, interests me because it is not really a depiction of any particular scene. 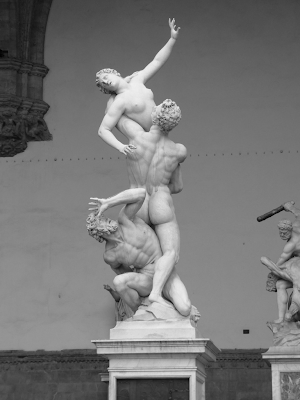 It is, rather, the culmination of a series of experiments Bologna made in depicting passionate emotion through an ascending column of figures. The title was only assigned after the work was completed, since in the Renaissance every artistic scene had to depict some well-known historical or legendary event. 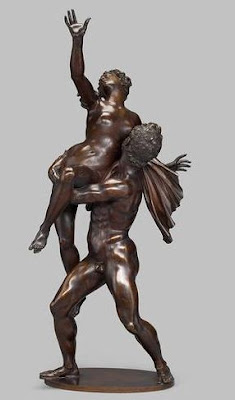 One of the earlier works in this series is this small bronze, now in Vienna. Had Bologna lived in the twentieth century he would have dispensed with any sort of historical tie-in and just called these works Ascending Passion I, II, III. In fact he would soon have abandoned figures for abstract forms.

While the works of Renaissance artists appeal to different sorts of contemporary art lovers, the impulses that drove them were often the same ones that drove Picasso or Henry Moore: ambition, zest for novelty, and a desire to express form, motion, and feeling rather than any particular subject.
Posted by John at 6:46 AM